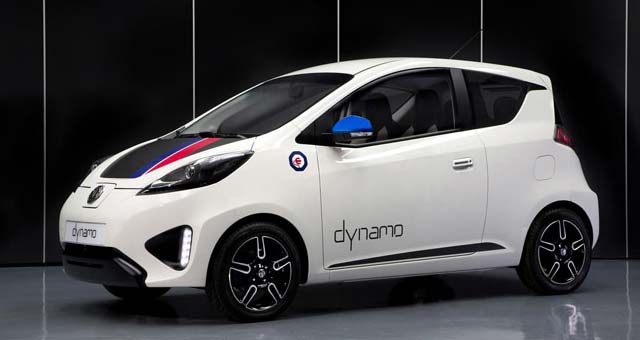 The MG Dynamo EV concept vehicle encompasses the latest in design and engineering technology from the iconic Longbridge based manufacturer.

The Dynamo EV concept has been developed in order to fully understand European market demand for a small, electric MG. The concept vehicle is the latest MG to be created at SAIC Motor’s state of the art European Design and Technical Centre (SMTC), located with MG Motor UK, at the Longbridge site in Birmingham.

SMTC and MG are both owned by parent company, SAIC Motor; the largest automotive company in China, currently ranked 103rd in the Fortune 500.

No details are offered about the MG Dynamo EV concept, which will be on display in London until April 28.

MG will hold an MG90 event at the Silverstone circuit on June 21-22 2014 to celebrate the marque’s 90th anniversary. The major event will feature historic MG vehicles alongside current production models and a preview of technology that will take the marque forward into the next 90 years. MG90 is set to be not only a great family day out but also a highlight of any enthusiast’s diary, celebrating all things MG past, present and prototype.