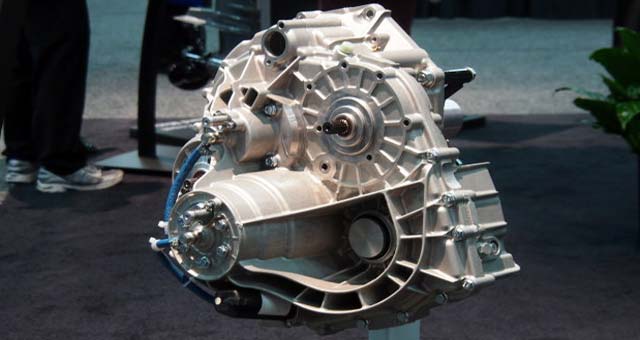 FEV North America, Inc. showed off its most recent transmission design advancements at the SAE World Congress at CoboCenter in Detroit, Mich.

Engine downsizing for increased fuel efficiency and reduced emissions, either alone or as part of an extended range hybrid system, has led to challenges for transmission developers who are being asked to provide higher levels of capability in a smaller package that can be used in a downsized engine compartment.

At the same time, it is desirable to reduce mechanical complexity and increase robustness. FEV says it has used a clean sheet approach to develop a transmission with such capability.

The plug-in hybrid transmission’s capabilities include 2-speed pure electric driving mode, use as an ICE range extender in parallel mode for efficient highway driving, and a highly flexible eCVT mode (power split) that features excellent launch performance without clutch slippage. The transmission does not use a torque converter and includes only one electric machine.

FEV’s transmission design process was supported by advanced CAE methods. The TCU software was developed in-house; the calibration was optimized via FEV’s proprietary TOPexpert tool chain. The result is a state-of-the-art transmission that is low in complexity, yet enables a high degree of vehicle functionality including the following:

Use of FEV’s systematic development process and CAE methods resulted in a transmission that is 10 percent lighter, shorter and less costly to manufacture than a similar dual-clutch transmission. The transmission is package-neutral and offers very low complexity and a high degree of robustness. Testing included putting the transmission through FEV’s extreme dynamic “Nurburgring” test cycle for sports car performance.