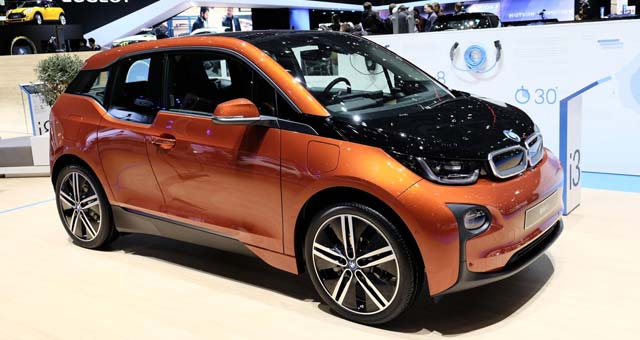 At a press conference hosted by the New York Auto Show and Bridgestone Corporation, the BMW i3 was declared the 2014 World Green Car.

The BMW i3 was chosen from an initial entry list of fourteen new vehicles from all over the world, then a short list of three finalists that included the winner as well as the Audi A3 Sportback g-tron (+ Audi e-gas) and Volkswagen XL1. The i3 also won the World Car of the Year Design award over the Mazda3 and Mercedes-Benz C-Class.

The World Performance Car of the Year was the Porsche 911 GT3, winning over finalists the Chevrolet Corvette Stingray and Ferrari 458 Speciale.

The World Luxury Car award — the first year the category has been honored — picked the Mercedes-Benz S Class over the Bentley Flying Spur and Range Rover Sport SUV.

To be eligible for the 2014 World Green Car award, a vehicle had to be all-new, or substantially revised, in production and introduced for sale or lease to the public in quantities of at least 10 in at least one major market during the period beginning January 1, 2013 and ending May 31, 2014.  Tailpipe emissions, fuel consumption, and use of a major advanced power plant technology (beyond engine componentry), aimed specifically at increasing the vehicle’s environmental responsibility, were all taken into consideration.

Due to the complexity of some of the ‘green’ technologies, five green experts were appointed by the World Car Awards Steering Committee to extensively review all documentation and specs associated with each candidate.   They were asked to create a finalists’ short-list for review by the sixty-nine World Car Awards’ jurors in their second round of voting in February.  The jurors’ ballots were then tabulated by the international accounting firm KPMG.

The experts commented that, “Radical in looks, construction, and powertrain, the BMW i3 is one of very few clean-sheet-of-paper cars designed from the ground up for efficiency, with the different needs of the new century’s megacities in mind. From its last-kilometer navigation system to take drivers from car to destination, to the shipped-around-the-world carbon-fiber-reinforced plastic body shell without a B-pillar, the BMW i3 pushes boundaries on many fronts”.