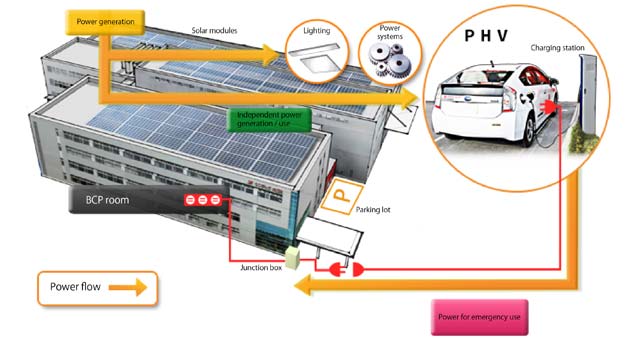 Kyocera Corporation and its wholly-owned subsidiary Kyocera Communication Systems (KCCS) have installed a “Solar Cycle Station for EV” at the headquarters of Shintec Hozumi Co., Ltd. in Aichi Prefecture, Japan.

Based on a development plan by Shintec Hozumi, KCCS designed and constructed the system so that solar-generated power charged to electric vehicles can be utilized in times of disaster as backup energy, contributing both to the efficient use of clean energy and disaster prevention.

With the purpose of protecting the environment and saving electricity costs, Shintec Hozumi installed a 230kW Kyocera solar power generating system on the rooftop of its headquarters to provide clean energy for the building. Furthermore, as part of its business continuity plan, the company adopted Kyocera’s Solar Cycle Station for EV in order to secure backup power for disaster prevention planning. KCCS undertook the design and construction based on this scheme, creating a recharging system which not only supplies solar power to plug-in hybrid vehicles owned by the company, but can also route electricity from the cars’ batteries back to the building when needed during an emergency.

In addition to the Solar Cycle Station, Kyocera markets a wide range of energy-related products based on its comprehensive strength in energy creation and communications technologies. With almost 40 years of experience as a solar module supplier, the company has expanded its solar business to also include the construction, operation and maintenance of solar power plants. Furthermore, Kyocera also markets lithium-ion batteries and Energy Management Systems (EMS) which contribute to more efficient energy use. This business development has been driven by the company’s strong awareness of the importance of renewable energy, and the company will aim to further expand its energy business.