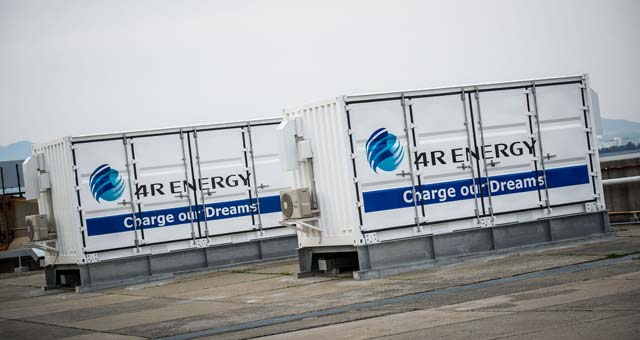 The man-made island of Yumeshima in western Japan’s Osaka is now home to the world’s first large-scale energy storage system, a project that also highlights the potential to reuse electric vehicle batteries.

Hikari-no-Mori, or “Forest of Light,” is a mega-solar project of 36,000 solar panels built on top of a landfill and managed by Sumitomo Corporation.

“This is the Osaka ‘Hikari-no-mori Project’ mega-solar power generation facility, a project with eight other companies,” said Mugihiko Ozeki, Senior Associate, Battery Business Development at Sumitomo. “We are testing the system controlling the output of the battery packs that charge the energy generated by this 10-megawatt mega-solar power station, linking the data from the photovoltaic panels in real time.”

Natural energy sources, such as solar and wind, vary in strength and frequency, and the innovative battery management system developed by 4R is the first of its kind, says the firm’s President Eiji Makino.

“Depending on use, a battery’s degree and rate of deterioration, and the battery’s condition, vary by vehicle,” says Makino. “So 4R has created a technology that allows us to have optimal control in regulating those conditions.”

The project is part of a three-year test under Japan’s Environment Ministry to expand renewable energy resources and power grid management. In Japan, electricity liberalization will be realized after 2016.

The batteries have up to 70% of capacity remaining – the average left after 100,000 kilometers or five years of driving.

Sumitomo General Manager Norihiko Nonaka said his company, in cooperation with 4R, expects to make the results of the project commercially viable in five years or so.

“The electricity-value-chain is divided into three sections: electricity generation, transmission and distribution. We would like to focus on electricity generation and transmission. If we rely on renewables to obtain energy, like solar and wind, they don’t always generate the necessary amount of energy and that may cause an issue with supply-and-demand,” said Nonaka. “On the other hand, if the cost of batteries is too high and is economically inefficient, 4R will have to continue to work and investigate the situation and market in the long term, about five years or maybe after 2020. By saving energy into power storage or batteries, our goal is to create a balance in supply versus demand, or create a system with the battery to maintain the quality of the electricity.”

In the meantime, the mega-solar farm will offer insights on energy management and storage, illumination that will eventually provide a power supply for Osaka.[wzslider height=”400″ lightbox=”true”]