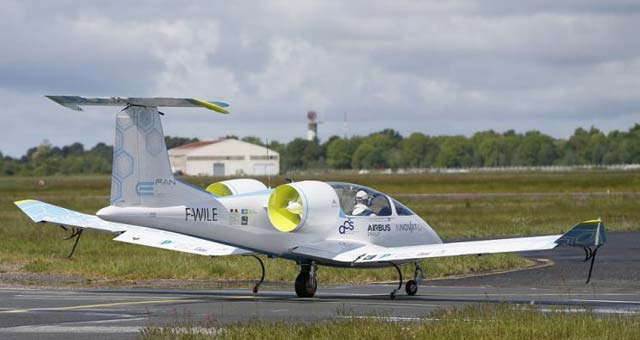 The successful first public flight of the E-Fan electric aircraft prototype was the highlight of Airbus Group’s E-Aircraft Day in Bordeaux, France.

The E-Fan electric aircraft is a highly innovative technology experimental demonstrator based on an all-composite construction. Airbus Group and its partners are aiming to perform research and development to construct a series version of the E-Fan and propose an industrial plan for a production facility close to BordeauxAirport.

Airbus Group’s research efforts support the environmental protection goals of the European Commission, as outlined in its “Flightpath 2050” programme.

“The E-Fan project and Airbus Group’s commitment to the field of electric and hybrid research show our vision of future technological developments. It will not only lead to a further reduction in aircraft emissions and noise to support our environmental goals but will also lead to more economic and efficient aircraft technology in the long run. Our focus is to develop innovations that will help define what tomorrow’s aerospace industry will look like,” said Airbus Group Chief Technical Officer Jean Botti.

The E-Fan is powered by two electric motors with a combined output of 60 kilowatts.

To guarantee a simple handling of the electrically powered engines and systems, the E-Fan is equipped with an E-FADEC energy management system.

As a first for an electrically powered aircraft, the E-Fan also features a pyrotechnically deployed airframe parachute rescue system.

The E-Fan’s motors are powered by a series of 250V Lithium-ion polymer battery packs, comprising 120 40Ah, 4V cells made by KOKAM. The batteries are housed within the inboard part of the wings outside the cockpit, and provided with venting and passive cooling. Because of timing and availability constraints, off-the-shelf Lithium polymer batteries are used in the technology demonstrator, giving an endurance of between 45 minutes and 1 hour. New batteries with a higher energy density will be installed later on, which will increase the endurance to up to 1 hour + 15 minutes reserve.

The batteries can be recharged in one hour, or they can be rapidly replaced by means of a quick-change system (not yet available on the demonstrator aircraft). An on-board 24 Volt electrical network supplies the avionics and the radios via a converter. A backup battery is provided for emergency landing purposes.