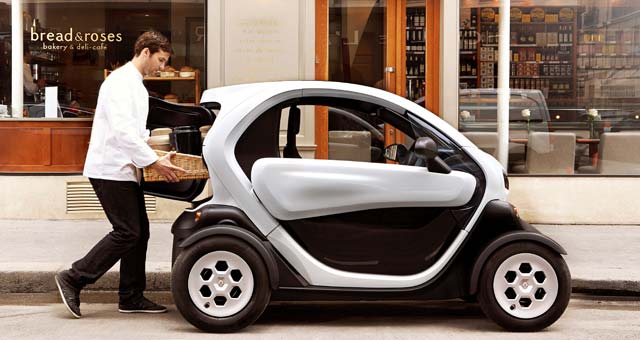 The Twizy family was expanded a few months ago with a new version designed to carry goods, Twizy Cargo. A large trunk and door make their appearance at the rear.

Twizy Cargo is a new take on the smart, fun and nimble full-electric light commercial vehicle.

The ultimate urban vehicle and now an LCV, Twizy Cargo is aimed primarily at delivery or express firms, such as lift operators, postal services and emergency services. Highly visible, it can be fitted with decals and customized.

Twizy turns heads wherever it goes. Its qualities are clear to business users, since 60% of buyers are companies. With its low running costs and singular user-friendliness, Twizy is a perfect tool for professionals.

Twizy Cargo features:
– A 180 liter / 75 kg trunk, replacing the rear seat
– Stowage accessible from the back via a lockable door
– Available in Life 45 and 80 trim levels

Co-developed by Renault Tech and Renault Sport Technologies, Twizy Cargo is eminently practical. It has the huge advantage of a watertight trunk with a capacity of 180 liters (75 kg), accessible via a rear door that opens to 90°. The conversion was made possible by adapting the cut-out of the rear end and doing away with the passenger seat.

The front seat is still moveable, and the door features a locking system that works with the ignition key.

In terms of safety, the compact vehicle has features worthy of a conventional car, with a protective cabin, 4-point seatbelt and airbag.

Because Twizy Cargo was converted by Renault, buyers can claim back VAT on the purchasing price and battery rental (from €50 a month), which is a major selling point for companies. Also, buyers gain the same warranty coverage as for other Twizy versions (two years unlimited mileage for the car, three years for the powertrain).

Twizy Cargo is a smart vehicle with more than one trick up its sleeve for clean, easy and economical deliveries. It also boasts peerless agility and is a cinch to park anywhere in the city.