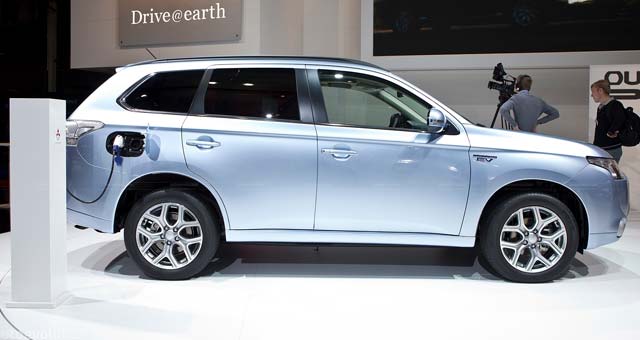 Mitsubishi has launched its fuel-efficient Outlander PHEV SUV in Australia.

With its spacious five seat interior, SUV practicality, 1,500kg braked towing capacity and four-wheel drive capability, the Mitsubishi Outlander PHEV is set to go on sale from March 31, priced from $47,490 plus on-road costs.

PHEV’s official electric range is 52km from a fully charged battery.  The battery range is further supplemented by the plug-in hybrid system, which automatically operates in Series and Parallel modes to significantly extend the cruising range – depending on driving and road conditions – once the drive battery charge reaches low levels.

PHEV is also inexpensive and simple to recharge.  Using a dedicated 15amp power outlet and based on an electricity supply rate of 30 cents per kilowatt hour, it would cost approximately $3.60 and take up to five hours to fully recharge a PHEV drive battery.

The PHEV has three different modes of operation – EV Drive Mode, Series and Parallel modes.  EV Mode refers to PHEV’s all-electric operation where the wheels are driven by the front and rear electric motors using only drive battery power.

In PHEV’s two hybrid modes – Series and Parallel – the 2.0-litre petrol engine is activated to increase power to either the drive battery or directly to the wheels, depending on driving conditions.

PHEV’s electric range can also be maximised through the use of regenerative braking.  Mitsubishi has designed PHEV with six regenerative braking settings, which the driver can select using the steering wheel paddles. And when the drive battery is depleted, PHEV can be switched to Battery Charge Mode which uses the petrol engine to generate and store battery power when the vehicle is stationary or driving.  Alternatively, Battery Save Mode can be activated to maintain battery charge while driving.

Mitsubishi launches Outlander PHEV with a model line-up that’s designed to place plug-in hybrid technology firmly within the reach of mainstream SUV buyers.  It will be available in two variants – the entry-level PHEV and top-of-the-range Aspire.

Outlander’s 5-star ANCAP safety rating has been extended to PHEV, thanks to its combination of active and passive safety features.

Outlander PHEV also has an inbuilt Acoustic Vehicle Alert System (AVAS) to warn pedestrians of an approaching vehicle.  The system operates when the vehicle speed is operating on EV mode below 35km/h and the brake pedal is not deployed.

Outlander PHEV also qualifies for Mitsubishi’s four-year Capped Price Servicing, which is $360.00 RRP for the first service and $470.00 RRP for the second, third and fourth services, which are scheduled every 15,000km or 12 months, whichever comes first. Included with Capped Price Servicing as part of the Mitsubishi’s Diamond Advantage, customers get a Roadside Assist package.

The Mitsubishi Outlander PHEV will be available from selected Mitsubishi dealers when it goes on sale on 31 March, 2014.