Toyota ME.WE Concept Nominated for Designs of the Year Award 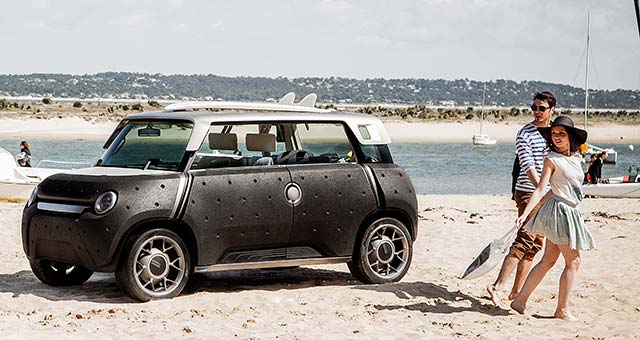 Toyota ME.WE concept car, conceived to challenge traditional thinking about vehicle design and engineering, has been nominated in the Designs of the Year awards at London’s Design Museum.

The ME.WE concept is constructed around a tubular aluminum chassis and covered in plastic panels (which are 100 percent recyclable) weighing just 14kg, the entire vehicle weighs 750kg – around 20 percent less than a conventional steel-built supermini.

Bamboo is used in the construction of the floor and for the cabin’s horizontal surfaces, chosen both for being a renewable resource and aesthetically pleasing. ME.WE is easy to keep clean with a simple wash, inside and out.

The Toyota ME.WE is a pick-up, convertible, off-roader and small city car in one. It appeals to a wide range of users, and has a small eco-footprint thanks to its light weight and the materials used in its construction.

The ME.WE concept will now join the other award nominated designs in an exhibition at the Design Museum from March 26, 2014.

In the Transport award category, the ME.WE takes fellow shortlisted designs; the Ifmove bicycle by Section Zero, the single-seat aircraft by e-Go, Volkswagen’s XL1 and the Obree electric bike.

As well as being considered for an award by an eminent panel of judges, the concept will also be in the running for the competition’s new social vote. During the course of the exhibition, two award contenders will go head-to-head in a popular vote among museum visitors and its worldwide Twitter and Facebook followers, via the www.designmuseum.org website. The Toyota ME.WE will be facing off against another competitor on 22 April.