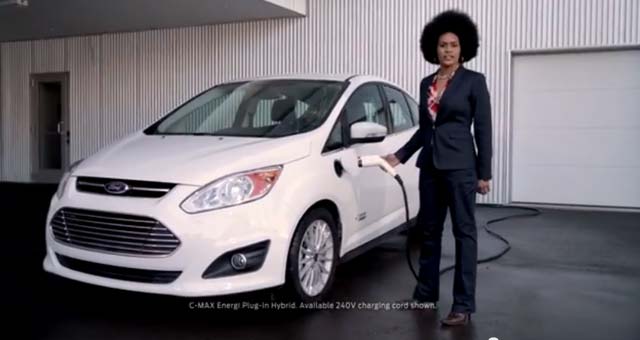 When GM rolled out its spot for the Cadillac ELR luxury plug-in hybrid coupe, the commercial received praise and criticism for its style, with slightly more opinions falling into the latter category.

Ford picked up on this “rich guy backlash” and responded in brilliant fashion. Instead of portraying an ELR buyer as smug and boastful (actor Neal McDonough), Ford hits on the same themes that Cadillac did — hard work, entrepreneurship and environmentalism — and paints the buyer of a C-Max Energi as someone who wants to make a difference.

It features Pashon Murray, the founder of Detroit Dirt, a sustainability consultancy and advocacy group that focuses on urban farming projects in the Motor City.

The Cadillac ad ends: “You work hard, you create your own luck, and you gotta believe anything is possible. As for all the stuff, that’s the upside of only taking two weeks off in August. N’est-ce pas?”

The Ford ad caps off with this: “You work hard, you believe that anything is possible, and you try to make the world better. You try. As for helping the city grow good, green, healthy vegetables, that’s the upside of giving a damn. N’est-ce pas?”