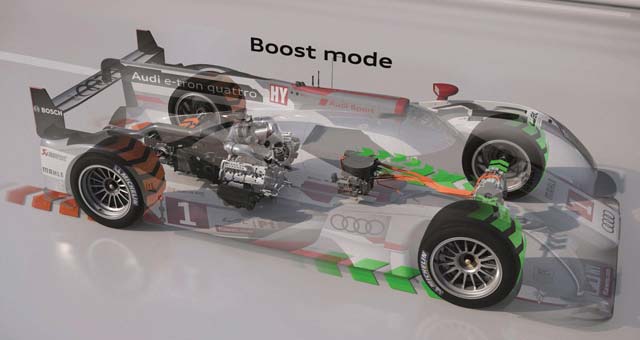 In 2012, Audi became the first manufacturer to win the Le Mans 24 Hours and the FIA World Endurance Championship (WEC) with a four-wheel-drive LMP1 sports car. Equipped with the innovative e-tron quattro four-wheel drive, the R18 has won ten WEC rounds to date including the 2012 and 2013 Le Mans 24 Hours plus the WEC World Champion’s titles in the same years.

“Innovations only become pioneering achievements when they’re successfully used and others start to adopt them,” says Head of Audi Motorsport Dr. Wolfgang Ullrich. “Audi, like no other manufacturer, has repeatedly achieved such feats ever since the debut of quattro four-wheel drive in 1980.”

Up to now, Audi had been allowed to use four-wheel drive only above 120 km/h (74.5 mph). But four driven wheels promise to deliver traction advantages particularly at low speed, for instance when the driver accelerates on exiting a tight corner. This year, this speed-related rule no longer applies.

A fundamentally new Motor Generator Unit (MGU), together with a differential, sits in the monocoque at the level of the front axle. Two drive shafts connect the system with the front wheels. Under braking, the kinetic energy of the race car is converted into electric current which flows into an optimized flywheel energy storage device located in the cockpit next to the driver. During acceleration, the recovered energy is converted again by the MGU and powers the front wheels.

While the quattro systems of Audi’s factory-fielded rally models and touring cars between 1980 and 1997 used a mechanical connection in the form of a drive shaft between the front and rear axles, the power distribution to the front and rear wheels in the e-tron quattro four-wheel drive system is governed strictly by an electronic control unit. In addition, due to the new efficiency regulations, a modified strategy for the engine and drive system will be used in 2014. The e-tron quattro four-wheel drive with its sophisticated energy flow is characterized by optimum efficiency.

“We’ve developed the entire hybrid drive from scratch again for 2014,” explains Dr. Martin Mühlmeier, Head of Technology at Audi Sport. “Specifically, it’s become even lighter and more efficient than before.”

As of 2014, a single e-machine connected to a front-axle differential is longitudinally mounted.These front-wheel drive components are completely integrated into the monocoque of the R18 e-tron quattro. The recuperated energy is stored in a newly designed flywheel energy storage system.[wzslider height=”400″ lightbox=”true”]