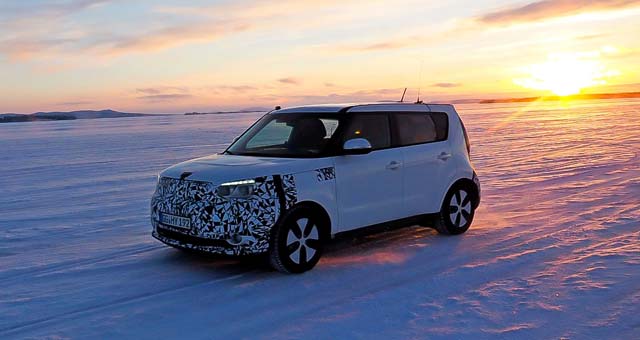 Kia is caring comprehensive winter testing program for the Soul EV ahead of its launch in the second half of 2014, finalizing development of the car and testing several innovative new drivetrain and on-board technologies.

Engineers are subjecting the car to the most extreme sub-zero conditions that Kia Soul EV owners are likely to experience during the colder months of the year.

The primary focus for the vehicle’s validation test in Swedish Lapland is the introduction of all-new Kia heating and ventilation technologies. These include a world-first driver-only ventilation system that improves the efficiency of the batteries and increases the vehicle’s overall driving range.

The bitter Scandinavian winter temperatures, which can get as low as -35°C, allow engineers to rigorously test the performance of the new heating, ventilation and air-conditioning (HVAC) technologies, as well as other electrical systems and the EV powertrain.

New HVAC efficiency technologies
Early on in the development of the Soul EV, Kia engineers identified the need to dramatically reduce energy consumption of the HVAC systems. In the worst case scenario, the maximum use of HVAC under extreme cold conditions could potentially reduce an electric vehicle’s effective range by up to 50 percent.

The new heat pump utilizes waste heat from the air-conditioning and electrical systems to improve the energy efficiency of the HVAC system and improve the car’s ability to efficiently heat up the cabin, thus minimizing electricity consumption from the battery.

The system, made up of a compressor, evaporator and condenser, allows the Soul EV’s HVAC system to harness the waste heat given off by electrical components. Instead of relying entirely on the electricity from the battery to heat the cabin to the driver’s desired temperature, the heat pump recycles heat energy emitted by the electronics to increase the efficiency of the heating and ventilation systems.

By reducing the load on the battery, the heat pump cuts energy consumption from the HVAC system and increases the overall driving range of the Soul EV.

Working in conjunction with the heat pump, the Soul EV is also fitted with a new smart air intake control system, which monitors and controls the amount of air entering and exiting the vehicle, as well as the humidity level in the cabin.

Air intake control recycles the air that has already been heated or cooled by the HVAC system, then carefully introduces the optimum amount of fresh air to the cabin. By better controlling the air flow inside the vehicle, the HVAC system is able to cool or heat the cabin more efficiently and minimize the use of the heating or air-conditioning during a drive. The system relies on a humidity sensor, temperature control and an intake actuator to monitor and control the in-flow of fresh air to the cabin.

The Soul EV is fitted with a new individual ventilation system, the first time such technology has been introduced to any production vehicle. This reduces energy consumption by only providing ventilation and heating to the driver, completely shutting off heating and ventilation to the foot-well and dashboard ventilation on the passenger side. This is in contrast to existing vehicles on the road, in which closing the vents merely diverts hot or cold air through other vents in the car while energy consumption remains the same.

The individual ventilation system, activated using the ‘driver only’ button on the dashboard, minimizes HVAC energy use when driving alone, resulting in a more efficient heating system and greater driving range.

A first in a Kia vehicle, the Soul EV is equipped with a new pre-conditioning or scheduled ventilation system. Accessing the car’s heating system through the car’s HMI interface, users can schedule their vehicle to pre-heat or pre-cool the cabin 30 minutes before they start the car. The system works while the car is plugged in and reduces load on the battery when the Soul EV starts running. Instead, the cabin is cooled or heated using power from the grid, ensuring the vehicle is already at the driver’s preferred temperature before departure.

The Soul EV
The Kia Soul EV is powered by an 81.4 kW electric motor, producing 285 Nm of torque, and a high-capacity 27 kWh lithium-ion polymer battery pack located beneath the cabin. The motor delivers its power to the front wheels through a single speed reduction gear set, allowing the Soul EV to accelerate from 0 to 100 kph in under 12 seconds, on to a top speed of 145 kph (90 mph). Kia engineers are targeting a driving range of over 200 km (124 miles).

While the efficient packaging of the electric motor and electronic systems meant engineers were able to reduce weight and minimize the intrusion of the battery pack into the cabin, the Soul EV benefits from class-leading 200 Wh/kg battery energy density, enabling the battery to store greater amounts of electric energy relative to its weight.

A battery heating system is also fitted to the Soul EV, designed to insulate and warm up the battery in order to minimize the adverse effects of sub-zero temperatures.

The 6.6 kW on-board charger enables the Soul EV to be recharged within 5 to 7 hours depending on the local electricity supply.

The Soul EV will be Kia’s first globally-sold electric vehicle and is due to start production in the second half of the year. The car is scheduled to go on sale across Europe and North America later in 2014.[wzslider height=”400″ lightbox=”true”]