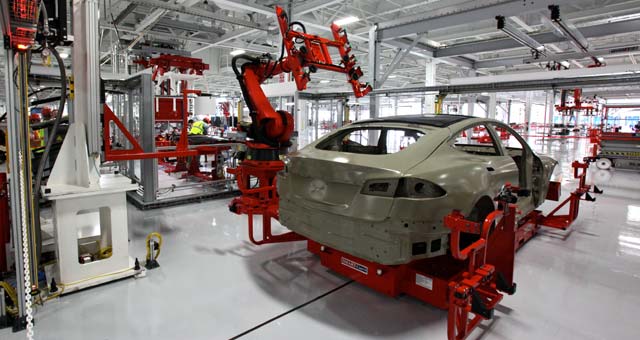 Global production of electric vehicles will rise 67% this year compared to 2013, according to a new report by IHS Automotive.

The report estimates that more than 403,000 pure electric and plug-in hybrid electric vehicles will be produced this year, up from more than 242,000 in 2013.

“European emissions standards are tightening in the second half of this year with the implementation of the European Commission’s Euro 6 legislation,” said Ben Scott, analyst for IHS Automotive. “At the same time, European automakers are introducing compelling new EV models, such as the BMW i3. These factors will boost EV demand and manufacturing in Europe in 2014.”

The Europe, Middle East and Africa region will account for the largest share of production at more than 40 percent, with the Americas and Asia-Pacific each making up about 30 percent.

The boom in production is the most significant of 10 predictions being issued by IHS Automotive concerning EVs in 2014.

This year will offer more choices for consumers who are considering buying EVs. Battery electric vehicles from the German automakers, including the BMW i3, Volkswagen’s e-Up!, the Mercedes-Benz B-Class Electric and Audi’s A3 e-tron plug-in hybrid, are planned additions to the current lineup of EVs in 2014.

The domestic charging market, typically an AC domain, will be shaken up this year with the introduction of DC chargers, predicts the IHS Automotive analysis.

This year will see the worldwide rollout of public “trio” chargers that comply with the AC-Type 2 Mode 3, DC-CHAdeMO and DC-CCS standards. These public infrastructure solutions have complete compatibility with all EV models, although costly for charge-station owners.

In 2014 and the coming years, automakers will deliver concept and production EVs with large batteries that have capacities of approximately 40 kilowatt hours (kWh), which equates to at least a 150-mile range, IHS predicts.

Because of this, automakers can afford to put larger batteries into their vehicles and reduce range anxiety.

“Less than $250 per kWh for a lithium-ion battery is the generally accepted price level for these batteries to become mass market in automotive – a price we will get closer to this year. The addition of Samsung SDI – the battery supplier to the BMW i3 and Fiat 500e, and potentially the new battery supplier for the Tesla Model S and X – will also help drive battery prices down,” he said.

Ford has presented its C-MAX Solar Energi Concept, which uses a solar panel on the roof of the car. With the help of a solar concentrator, enough energy can be drawn from the Sun in a day to equal a four-hour battery charge equal to 8 kWh.

Bosch has developed a new start/stop system that shuts off the engine when the car is coasting, delivering fuel savings of up to 10 percent. Technologies like this could bring petrol-powered vehicles closer to the energy-saving benefits of hybrid electric vehicles.

Public charging-station operators and owners will continue to struggle to make a profit on EV charging in 2014, says the IHS Automotive report. Although electric vehicle production is now closer to reaching the expectations of five years ago, there still are not enough grid-dependent vehicles on the road to generate large revenues from public charging.

The price of EVs is expected to decrease in 2014, as more manufacturers enter the marketplace. The price of the 2014 Chevrolet Volt dropped, and IHS analysists expect other vehicle models to follow the trend.

Price is the main reason why uptake of these vehicles hasn’t been as high as expected, so incentives are critical if countries are serious about the adoption of such vehicles. In 2014 it may be possible that we see EV legislation or incentives in new regions.