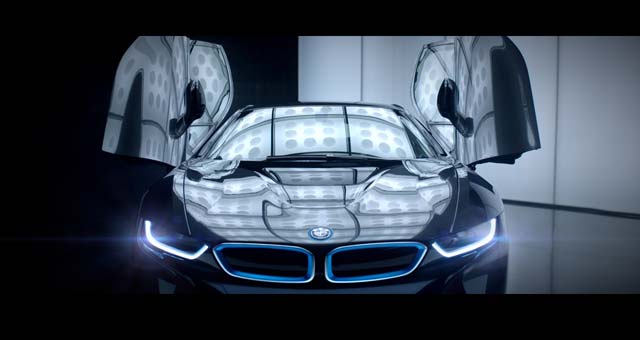 BMW showed off its BMW i brand during the opening ceremony of the Sochi 2014 Winter Olympics on Friday night.

The first of three i television commercials featured the i8 plug-in hybrid super car, BMW said in a statement.

The commercial called “Hello Future,” used the theme and words from “2001: A Space Odyssey,” to position the i8 as a futuristic vehicle. The 1964 book envisioned what the future in 2001.

Additional television spots for BMW i debuting during the NBC Sochi 2014 broadcast include “Sightings” and “SHHH.” “Sightings” follows a variety of people trying to describe something they have never seen before; something remarkable and other-worldly. They are in fact trying to describe their sighting of the futuristic BMW i8, featuring an intelligent plug-in hybrid system that can reach speeds of up to 155 mph. “SHHH,” featuring actress Olivia Crocicchia (“Rescue Me”), follows a boy who sneaks out in his dad’s quiet and all-electric BMW i3 as he tries to impress his dream-girl with the ultimate joyride.  In the end, the joyride helps him win the girl, though the boy is caught only when his dad is notified through the BMW i Remote App, which allows drivers to share information with their vehicle via their smartphone, that his BMW i3 has been plugged back in to charge.

BMW is also debuting digital shorts at NBCOlympics.com featuring the two i cars.

BMW of North America is the official mobility partner of the United States Olympic Committee.

The BMW i cars go on sale in the United States starting in April.

Feb 8, 2014Blagojce Krivevski
Global Electric Vehicle Production to Surge 67% in 2014Li-ion Batteries Could Soon be Safer, Thanks to a Gummy Material