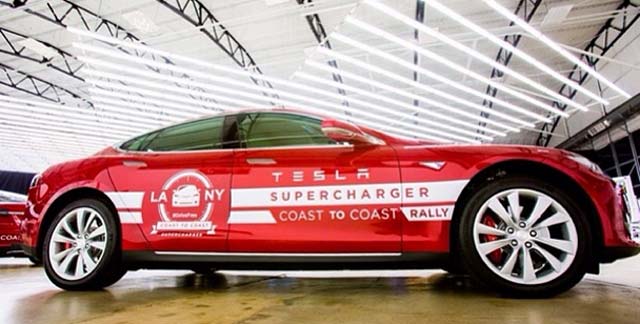 According to the Tesla, there are a total of 71 supercharger stations installed around the country, available for use by 80% of the population (as long as you own a Tesla Model S). Each station is located near major highway intersections, next to restaurants, cafes, or shopping malls in order to allow the owners to relax for the 20 minutes it takes the vehicles to recharge.

Tesla says it will be posting daily updates to its blog. Here is the preliminary info:

“At midnight tonight, a Tesla Motors team will depart Los Angeles en route to New York City in two Model S sedans to mark the completion of the first cross country Supercharger route. We’re aiming to complete the journey within about three days and set a new GUINNESS WORLD RECORDS achievement for lowest charge time for an electric vehicle traveling across the United States.

We energized the final Supercharger in the cross country route last week, marking the completion of a network that spans more than 3,400 miles. There are now more than 70 Supercharger sites around the US, at which Model S owners can charge for free. A Supercharger takes as little as 20 minutes to replenish half a charge.

The Cross Country Rally team will gather tonight at the Tesla design studio in Hawthorne, Los Angeles, for a launch event, before starting the drive at 12.01am on Thursday. The trip will take the cars through mid-winter conditions across the middle of the country, with stops only at Superchargers.”