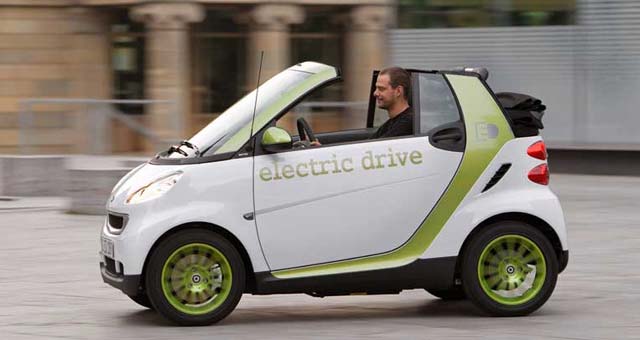 This year, the Smart ForTwo Electric Drive tops the “Greenest” list with a highest-ever score of 59 out of 100, just in time for the vehicle’s nationwide rollout.

Following closely behind are the Toyota Prius C and the Nissan Leaf with scores of 57 and 55 respectively. Toyota’s entire family of Priuses performs exceedingly well again this year, with the regular Prius and the Prius plug-in hybrid nabbing spots #4 and #7.

The “Meanest” list this year is comprised of heavier light-duty vehicles and European sports cars that are the least friendly to the environment. The dirtiest vehicle for 2014 is the Class 2B Ram 2500 with a Green Score of 18, followed by the Bugatti Veyron and the Ford E-150 FFV Wagon with scores of 19 and 21 respectively.Special use vans above 8,500 lbs are given a Green Score but are not included on the “Meanest” list.

This “Greener Choices” list includes trucks and SUVs such as the Buick Encore, Nissan Rogue, and the Ram 1500 HFE. The Chevrolet Spark and Nissan Juke top their respective car classes. As the list demonstrates, consumers can make “greener choices” whatever their vehicle needs may be. Domestic manufacturers claimed four of the twelve “Greener Choices” spots.

[CNG] denotes compressed natural gas
[P] denotes premium gasoline.
“auto CVT” denotes continuously variable automatic transmission.
a A listing with two emission standards (e.g., Tier 2 bin 2/ PZEV) denotes a single vehicle carrying both a Federal and a California emission certification. Green Scores for such listings reflect the cleaner of the two certifications.
b Fuel economy for electric vehicles is provided in miles per kilowatt-hour.
c Fuel economy for plug-in hybrids is provided in miles per gallon for gasoline operation and in miles per kilowatt-hour for electric operation

Meanest Vehicles for the Environment in 2014

[P] denotes premium gasoline.
“auto stk” denotes manually adjustable automatic transmission.
a A listing with two emission standards (e.g., Tier 2 bin 5 / LEV II) denotes a single vehicle carrying both a federal and a California emission certification. Green Scores for such listings reflect the cleaner of the two certifications.
b The ULEV version of this vehicle scores a 22
c The van version of this vehicle scores a 22