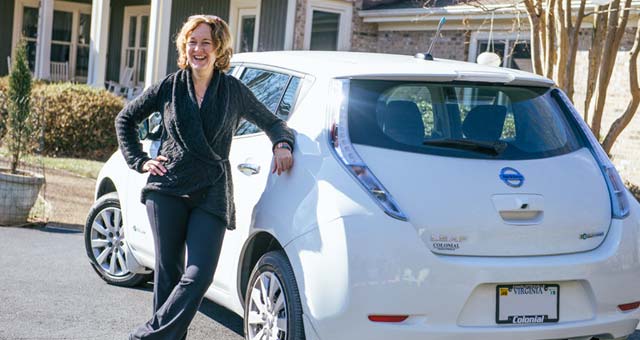 The all-electric Nissan LEAF marked another milestone in the history of electric vehicles as it passed the 100,000 sales mark, reinforcing its position as the best selling electric vehicle of all time.

Nissan LEAF launched in the United States in December 2010, , and it is now available to customers in 35 countries on four continents.

The United States accounts for nearly half of the sales worldwide. The pace of LEAF sales has continued to accelerate. In 2013, Nissan sold 22,610 of the electric vehicles in the United States, more than twice as many as in 2012 and more than 2012 and 2011 LEAF sales combined. Nissan LEAF traditionally has performed well on the West Coast with notable markets such as San Francisco, Los Angeles and Seattle, but now interest has expanded across the country. New hot markets have emerged such as Atlanta, which has been the No. 1 LEAF market for the past five months.

The story of the 99,999th and 100,000th LEAF made for an eye-catching headline, and the sale was a strong testimonial for Nissan to highlight.

Amy, a 47-year-old mother of two, wasn’t even in the market for a new car. Then she spotted a University of Virginia colleague’s Nissan LEAF and decided she wanted to know more about the “modern-looking, futuristic and progressive” car. Nissan LEAF was the first car Amy test drove, and she loved the zip it had. A Mercedes driver for 10 years, Amy describes herself as “picky.” Quality, safety, a “glide ride” and reliability were at the top of Amy’s auto shopping list criteria.

“The general fuel economy out there is unimpressive and many of them felt tin-canny. I didn’t even want to look at anything in the 20 MPG range. I considered the VW Jetta TDI, Toyota Prius, Honda CRV and a couple of Subaru wagons, and I always came back to the Nissan LEAF. Everything else seemed stuck in the past,” Amy explained.

Amy ultimately chose a LEAF S in Glacier White. Her commute is about 10 miles to the university each day and most of her errand-running is around the city—well under the LEAF’s estimated range of 84 miles on a full charge.

“I have chosen my Nissan LEAF because I am very interested in its running costs,” Dr. Garner said. “The cost of ownership such as maintenance, insurance and charging also convinced my wife. She had the experience of driving 500 miles in a borrowed LEAF and the low cost was remarkable. So she was converted and insisted that we had a LEAF.”

As a father of three, Dr. Garner says the car is convenient and comfortable for his family.

“The Nissan LEAF is perfect for everyday commuting, and there is no problem with charging it. It is ideal for the family as it is quiet and not tiring even on longer journeys, because there is no vibration. Above all, it is a fun to drive car!”

One of the first Nissan LEAF customers was Mr. Wasei Hirai, the Buddhist priest.

“It is profound that Nissan LEAF sales have reached 100,000 units,” he said at his temple in Tokyo in Japan. “Natural beauty and history are very important for me, but I often drive a car because it is necessary for life. That is why I have chosen 100% zero emission Nissan LEAF. The Nissan LEAF driven by electricity produces zero emissions, no sound, and no vibration. That new type of driving car attracted me. “Surprisingly, the innovative aspect of the Nissan LEAF matches this old temple quite naturally,” he continues. “So, I believe that such a temple should take the initiative to propose messages about the environment and a way of living. I think the day will come that whenever people think of a car, it will be an electric car.”

After leading the era of electrification in passenger vehicles with the LEAF, in 2014 Nissan will become the first to bring a mass-market all-electric light commercial vehicle to market. The e-NV200 will go on sale in Europe and Japan bringing the benefits of quiet, cost-efficient, zero-emissions mobility to businesses.

In June 2014, Nissan will participate in the 24 Hours of Le Mans with the NISSAN ZEOD RC and aims to set a record for the fastest all-electric, zero-emissions lap of the circuit. Nissan is committed to using the EV platform to break new ground in both the commercial-vehicle and motorsports arenas.