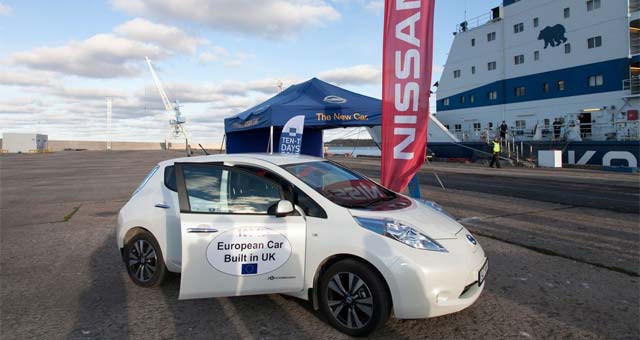 Nissan is leading a consortium which aims to establish a network of rapid chargers for electric vehicles running the full length and breadth of the United Kingdom and Ireland.

When complete, a total of 74 rapid chargers will have been installed, covering more than 1,100 kms of major trunk routes and providing EV-friendly links to five seaports and five international airports.

The project, named Rapid Charge Network (RCN), was presented at the Trans European Transport Network (TEN-T) event in Tallinn, Estonia, which was hosted by European Commission Vice President Siim Kallas. Estonia was the first country in the world to open a nationwide EV fast-charging network.

Funding for the Rapid Charge Network project is being led by Nissan – maker of the world’s best selling electric vehicle, the Nissan LEAF – is co‑financed by the European Union through the TEN-T programme, with further contributions from fellow consortium members Renault, BMW and Volkswagen and ESB Ireland’s Electricity Supply Board. It also draws on the network expertise of Zero Carbon Futures and Newcastle University.

“Nissan is delighted to be leading this important initiative. The UK’s Rapid Charge Network will provide a vital sense of security for all EV drivers, not just those using the award-winning Nissan LEAF, as well as helping to promote the advantages of zero emission mobility to others,” said Olivier Paturet, General Manager Zero Emission Strategy & Corporate Planning.

Running on two priority road axes on the mainland, the network will link major ports and cities including Stranraer, Liverpool, Holyhead, Birmingham, Felixstowe, Leeds and Kingston upon Hull with connections to existing networks in Dublin and Belfast in Eire and Northern Ireland.

Significantly, the rapid chargers being deployed will be the first state-of-the-art multi-standard units in public operation in Europe. This will ensure that every EV owner in the country can undertake long journeys secure in the knowledge that they will never be far from a rapid charger no matter what brand of car they drive. The units are compatible with cars using 44kW DC CCS, 44 kW DC Chademo or 43 kW AC systems. Installation of the rapid chargers is due to be completed by the end of 2014.

By providing a network of chargers for EV drivers, the RCN project is designed to encourage further take up of electric vehicles in a bid to further decarbonize road transport.

The network will also be used to gather strategic information from users, including customer charging behavior and changes in mobility patterns, to help plan the roll-out future rapid charging infrastructure in member states across Europe.

The RCN project is one of 30 priority transport projects across Europe identified by TEN-T. The Projects were chosen according to the added value they offer to the European community and their contribution to the sustainable development of transport systems. They include rail, mixed rail-road, road and inland waterway projects, as well as a ‘motorways of the sea’ scheme.