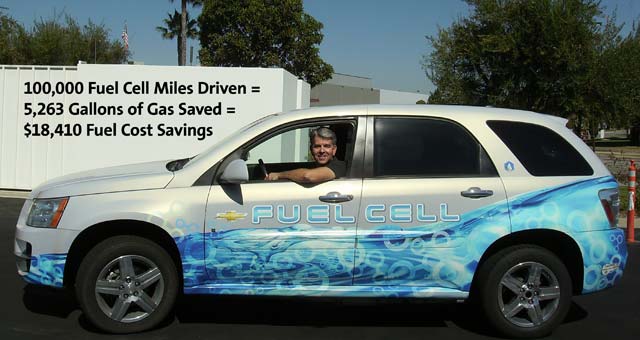 The specially equipped 2007 Chevrolet Equinox was part of GM’s 119-vehicle Project Driveway program, launched in 2007. To date, GM’s fuel cell test fleet has accumulated nearly 3 million miles, more than any other automaker. By GM’s calculations, the fleet has saved 157,894 gallons of gasoline – more than $552,631 in avoided fuel cost.

During Project Driveway, the 100,000-mile Fuel Cell Equinox operated as a fleet vehicle at Walt Disney Company’s studio in Burbank. After Project Driveway, it became an engineering development vehicle driven by as many as 10 GM engineers.

Todd Goldstein from GM’s Advanced Technology Demonstration Program was behind the wheel of the fuel cell vehicle when its odometer reached 100,000 miles. The senior project engineer routinely drives the vehicle between the Los Angeles suburb of Torrance and outlying communities of Oxnard, Santa Clarita, Victorville, Palm Springs and San Diego.

“The Fuel Cell Equinox is an attention-getter everywhere I go,” Goldstein said. “The people who ask me about it are very enthusiastic about the technology.”

Oct 22, 2013Blagojce Krivevski
An Electric Car Conversion Doesn’t Have to be UglyHow the Family Driverless Car Will Look