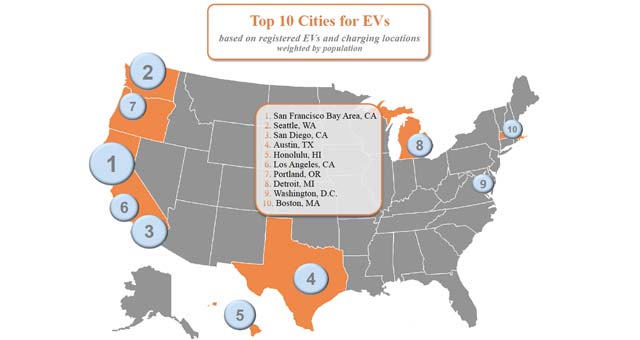 ChargePoint – the company with largest electric car charging station network in the U.S. – released a list of the Top 10 Metropolitan Areas for electric vehicles.

“We are witnessing historic growth in the electric vehicle market,” said Pasquale Romano, CEO of ChargePoint. “The cities and the businesses in those communities that invest in EV infrastructure, not surprisingly, also see the largest sales in electric cars. We are no longer debating if EVs have a future, but instead are witnessing cities across America compete to be the most EV friendly.”

While Los Angeles has the most number of EV drivers (over 17,000), based on population differences, San Francisco Bay Area with nearly 15,000 EV drivers led the nation, followed by Honolulu and Seattle. When it comes to EV charging stations, San Francisco Bay Area also led the way both cumulatively and based on population with nearly 4,000 stations, and equating for population, Austin and Seattle followed.