The Tidal Wave of Electric Cars 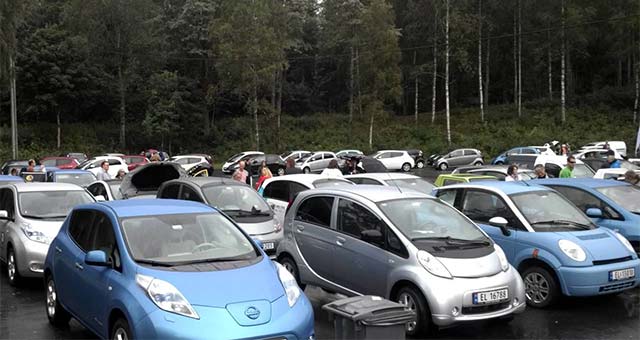 Going right back to the time of the Model T, adoption of new automotive technology has had its sluggish points. But there have also been big boosts along the way that contribute to a continually rising tide of sales that will, in time, make the new product into the new normal.

An electric car remains a novelty among most consumers worldwide. But there remains a steady stream of new buyers taking that first step.

Sometimes, it’s a practical step. Sales of four-wheel-drive vehicles lurched in 1977 and 1978 after massive blizzards locked much of the U.S. in deep snow. Another such round occurred in 1994, and who in the Delmarva area can forget the 1996 monster?

Electric car sales have mysteriously remained inelastic in the face of surging oil prices over the last decade. Even in Maryland, in the shadow and the broadcast market of DC, the constant discussion on energy policy has never spurred much interest in electric cars. Instead, drivers have stayed in gasoline-powered cars but shopped for better MPG.

Now that much of that shift is over, it’s likely that another shock in oil could prove beneficial to the electric market, but only time will tell.

Regardless, there will never be any fewer electric cars. So consumers can think of each passing day as the new low watermark in electric car usage. As such, owners of such vehicles have some reasons to celebrate the ongoing surge in their popularity.

Owners of electric cars often lament the headaches of seeking help with even minor repairs. Such problems necessitate a trip to the dealer, which initially would have been a trip at least to Baltimore, if not further, since the cars aren’t widely in inventory. At the dealer, drivers might end up with a technician who, at best, has “seen one of these in training”.

In time, such work will move out of the dealers-only domain, pushing away from Charm City, and soon Salisbury auto repair shops will be able to handle a Tesla just as a Tundra. It’s strictly a matter of time, volume, and of course, warranty expiration. Once drivers feel that a simple problem won’t waste a day’s travel time, electrics will garner new attention.

Electric cars, for all the advancements they’ve made, remain a very new technology. On top of that, they’re being pushed out to consumers as aggressively as possible. In the Balto-DC-Philly-NYC market, that’s particularly true.

The learning curve is steep, the precedents few, and so it’s little wonder that recall issues are popping up here and there.

Fortunately, popularity helps. The more drivers who are behind the wheel of electric cars, the more bugs are worked out. Many of the problems are centered around drivability and function than on performance, so each piece of feedback from consumers nudges the industry ever closer to a broadly-appealing design.

The truth is that there is an element of peer pressure on each side of the debate between “buy” and “don’t buy” on electric cars.

The automobile remains a major status symbol, especially in the U.S. And with the current high level of oil prices, it’s an even greater statement of wealth to remain behind the wheel of a hulking gas hog.

On the opposite side is the green movement, working earnestly to direct minds toward electric vehicles in ever-greater numbers.

Most consumers drift somewhere in the middle until the pull of one side finally wins. The effect finally snowballs, squeezing the middle ever tighter as more drivers choose up on the electric.