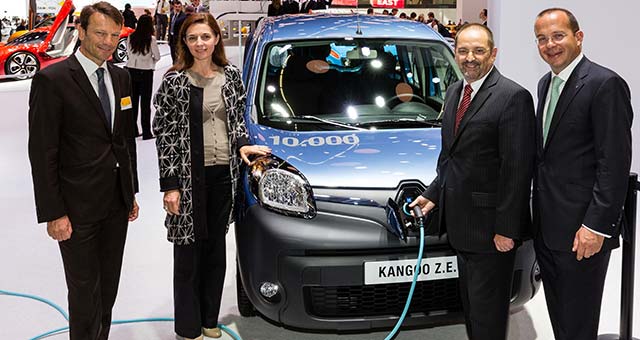 The Renault Group has celebrated the 10,000th registration of a Kangoo Z.E., the European segment-leading small electric van.

The Renault  Kangoo Z.E. will be used by German Railways’ maintenance division.

Kangoo Z.E. is Europe’s best-selling small electric van and accounts for almost 10 percent of Kangoo van sales. It is also the best-selling electric vehicle in France where it has won over some 6,000 business customers.

Since its launch at the end of 2011, Kangoo Z.E. has been acclaimed repeatedly by the media and secured International Van of The Year award in 2012. Its customers are also very positive, since 95 percent of them say they are satisfied with the van and praise its driving comfort, absence of noise and loading capacity.

The zero-emission LCV was restyled last June with a new front end and the incorporation of new features like the connected R-Link multimedia tablet.

Kangoo Z.E. is manufactured exclusively at the MCA plant in Maubeuge, France, and is marketed in around 20 European countries.