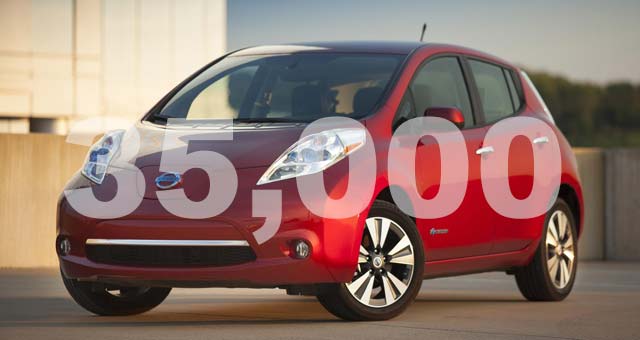 With cumulative U.S. sales passing 35,000, Nissan LEAF is bringing owners throughout the United States together to share their enthusiasm and experiences during National Plug In Day on Sept. 28 and 29.

Nissan, a presenting sponsor of National Plug In Day, says that sales of the LEAF electric vehicle are up 317 percent year-over-year since launching the 2013 model in March, and these sales are rapidly expanding in to new U.S. markets including Atlanta, St. Louis and Denver.

Efforts to promote electric and hybrid vehicle sales — which remain at less than one percent of all cars currently purchased in the U.S. — include the National Plug In Day, where EV parades, tailgates and live music events will take place across 80 cities in the United States.

National Plug In Day, organized by Plug In America, Sierra Club and the Electric Auto Association, is a nationwide celebration created to heighten awareness of and highlight the benefits of plug-in vehicles, such as Nissan LEAF.

Erik Gottfried, Nissan’s director of EV Marketing and Sales Strategy, said: “From the early adopters to the most recent buyers, our owners consistently tell us that Nissan LEAF quickly becomes the car of choice in their household, and they spread the word about LEAF to their family and friends. Nissan is sponsoring National Plug In Day to celebrate the growing presence of electric cars like Nissan LEAF and the role that our owners are playing in spurring the next round of EV buyers.”

“Plug-in car buyers are not just motivated by environmental concerns. We buy plug-ins because they cost much less to drive, and they are just better, quicker, more fun cars to drive,” said Plug In America spokesperson Zan Dubin Scott, who launched National Plug In Day. “National Plug In Day brings together thousands of people across the country who already see these benefits and want to share the word with others.”