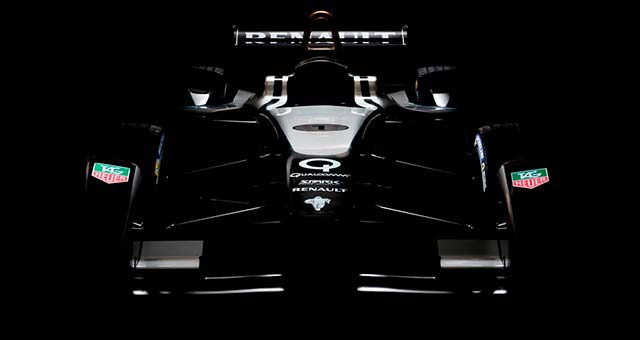 Watched by invited guests and members of the press, the SRT_01E has been designed and built by Spark Racing Technology, headed by the renowned Frédéric Vasseur, together with a consortium of the leading manufacturers in motorsport, and will compete in the inaugural FIA Formula E Championship – the world’s first global electric race series beginning in September 2014.

Using the very latest technology, the SRT_01E aims to push the boundaries of what is currently achievable in electric motorsport, whilst ensuring a balance between cost-effectiveness and sustainability, in addition to coping with the demands of racing entirely on city-centre circuits.

The car’s monocoque chassis has been constructed by leading Italian firm Dallara and has been aerodynamically designed to aid overtaking. Made from carbon fibre and aluminium, the chassis will fully comply with the 2014 FIA crash tests.

Providing the electric motor, gearbox and electronics is McLaren Electronics Systems, the world leader in high- performance technology for motorsport. Williams Advanced Engineering, part of the Williams group of companies that includes the world famous Williams F1 Team, is responsible for the design and supply of the batteries and their battery management systems; producing 200kw (the equivalent of 270bhp).

Overseeing all the systems integration, performance optimisation and powertrain electrical safety is Formula E’s Technical Partner Renault, a leader in electric vehicles and an expert in motorsport thanks to its Renault Sport Technologies and Renault Sport F1 programmes. Meanwhile, custom made 18-inch treaded tyres have been created by Official Tyre Partner Michelin, with just one durable tyre to cater for both wet and dry conditions and helping to reduce overall costs and promote sustainability.

The car, which has been 10 months in the making, will be used by all 10 teams and 20 drivers competing in the new zero emission series although only for the first season as Formula E is an ‘open championship’ designed to encourage manufacturers to build their own car to help accelerate R&D around the electric vehicle. A total of 42 cars will be produced by Spark with each driver using two cars during the one hour races.

F1 Power Unit. Renault is also working with Spark to enhance the performance and safety level of the SRT_01E car powertrain. The objective is to design an outstanding race car that will be clean, reliable, safe as well as fast and responsive.

The SRT_01E will now remain at the Frankfurt Motor Show for the duration of the event, with a duplicate car also on display at the FIA Mobility Conference in The Hague on Tuesday, 11th September. After that it will undergo a stringent FIA crash test followed by an extensive testing programme.[wzslider height=”400″ lightbox=”true”]