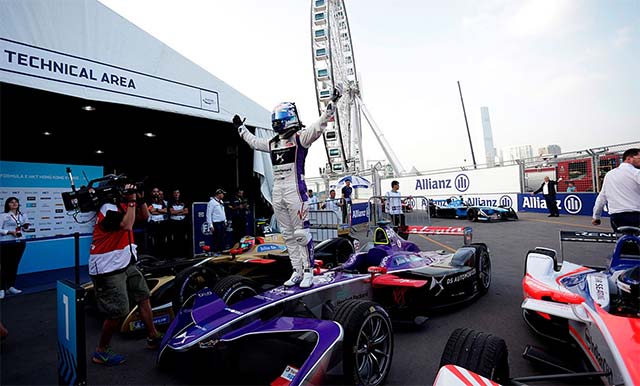 Despite incurring an eight-second penalty in the pits, DS Virgin Racing driver Sam Bird clinched victory in Round One of the HKT Hong Kong E-Prix.

With a delay at the beginning of the race caused by TECHEETAH driver Andre Lotterer hitting the wall on Turn 3, all cars returned to the pit lane under a red flag.

TECHEETAH’s Jean-Eric Vergne managed to hold onto his lead for 20 laps until DS Virgin Racing’s Sam Bird skillfully took him on the inside of Turn 6.

Charging into the pits, Bird overshot the mark and exited the car outside of the garage, instantly incurring an eight-second penalty. Nonetheless, he emerged unscathed, returning to the lead as Mahindra Racing’s Nick Heidfeld and Vergne continued to battle it out for second and third.

Reigning champion Lucas di Grassi was forced into the pits with a mechanical problem following the incident at the start of the race, where he switched to his second car with 27 laps to go.

Former champ Sebastien Buemi came to a halt around the hairpin as a result of his battery management system failing on his car.