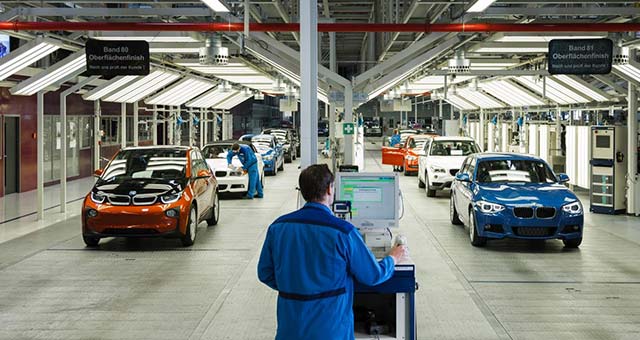 The BMW Group entered a new era in automotive construction today with the start of series production of the BMW i3.

Series production of the BMW i3 got under way today in the presence of the Minister President of the state of Saxony, Stanislaw Tillich, Mayor of Leipzig, Burkhard Jung, and BMW AG Board Member for Production, Harald Krüger.

The world’s first premium electric vehicle to be purpose-designed for this form of drive system is the result of an all-encompassing development approach targeted at reducing fuel consumption and emissions in urban areas.

Exceptionally high standards of sustainability and resource efficiency have also been achieved in the selection of materials and production processes employed. This is the first time that carbon-fibre-reinforced plastic (CFRP) has been used in automotive volume production. The body structure of the BMW i3 consists entirely of this extremely lightweight and durable material, allowing the extra weight of the batteries for the electric drive system to be cancelled out. By industrializing the manufacturing process for CFRP, the BMW Group has become the first company worldwide to make its use in vehicle production economically viable.

At the Leipzig plant alone, some €400 million has been invested in new structures and machinery for the production of BMW i models and 800 new jobs have been created.

The production network for BMW i also sees key components for the BMW i3 manufactured at BMW Group plants and joint venture facilities at Moses Lake in the USA and Wackersdorf, Landshut and Dingolfing in Germany. The company has invested a total of around €600 million in the BMW i production network and generated over 1,500 jobs.

The first BMW i3 off the line has been recruited as the lead car for the International Berlin Marathon on 29 September and was handed over to German marathon runner Jan Fitschen. Deliveries of the BMW i3 to customers in Germany, the UK and other European countries will begin in November, with the car’s launch in the USA, China and other markets to follow in early 2014.

“Today represents a milestone in our company’s development,” said BMW production chief Krüger. “We are making history with the BMW i3. Not only is our first electric car about to hit the road, we are also completely redefining sustainability with regard to personal mobility thanks to groundbreaking technologies and processes.” Indeed, the entire value chain is firmly committed to sustainability and efficiency: “We require 50% less energy and 70% less water, and source the electric energy for production of the BMW i models CO2-free from the wind turbines at the plant,” added Krüger. This huge reduction in energy and water consumption can be attributed primarily to the elimination of the traditional painting process for steel and aluminium bodies.

Stanislaw Tillich was delighted that this new chapter in automotive history would be written in the federal state he heads: “I’m proud that, in BMW, we have such an innovative carmaker here in Saxony and that BMW is building the i3 at its plant here in Leipzig. This proves that Saxony is an attractive location in terms of its research and educational institutions, its infrastructure and, most importantly, its highly qualified and motivated people.”

Leipzig’s mayor Burkhard Jung concurred: “The BMW plant has been a boon for our city from the beginning and continues to act as a growth engine for jobs. With BMW also basing production of its electric vehicles here, the prospects for the local area are extremely healthy.”[wzslider height=”400″ lightbox=”true”]