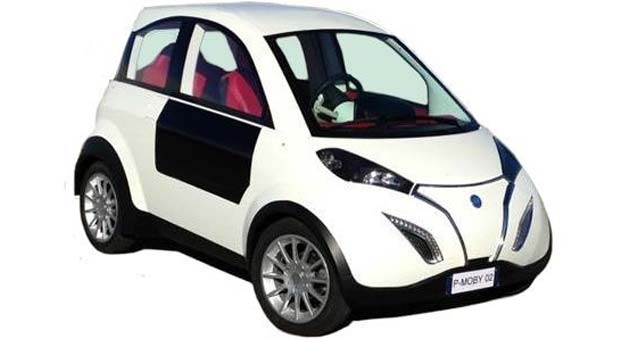 Electric cars are set to play a key role in the future of urban mobility, reducing pollution, decreasing dependence on fossil fuels and saving drivers money.

But an electric car is only as good for the climate as the electricity used to power it. An  electric car may not emit any carbon, but the coal-burning power plant that allows it to recharge certainly does.

The P-MOB prototype is an electric mini that sports its own solar panels, and runs on the sun alone.

The P-MOB prototype weighs less than 600 kg without its battery pack, utilizes a kinetic energy recovery system when braking, and is reportedly 30 percent more aerodynamic than other vehicles of the same dimensions. It has two motors and two differentials – one assigned to each axle. The P-MOB can reach speeds of 100km/h (62 miles per hour).

Like most electric vehicles, the P-MOB prototype can be charged directly from the electricity grid. The addition of flexible high-efficiency mono-crystalline silicon solar-cell technology, however, means that it can also be powered by the sun alone and can even sell back power to the electricity grid once its batteries are full.

When tested at Fiat’s track in Turin, Italy, the prototype was able to travel 20 km (12 miles), powered by solar power alone. The speed at which it traveled hasn’t been stated, although it did reportedly consume energy at a rate of about 80 watt-hours per kilometer.

‘The design has met the highest safety ranking, a low footprint and extremely low energy consumption, making the vehicle ideal for most people’s needs in cities as well as suburban roads,’ says Dr Pietro Perlo; who helped oversee the development of P-MOB .

P-MOB prototype regulations for both “micro” electric vehicles as well as more classical regulations for vehicle categories such as M1 (a car with eight passenger seats or fewer).

The P-MOB will continue to be developed within the EU-MOBY research and development platform, supported by the European Commission. The P-MOB project includes researchers from Siemens in Germany; Mazel in Spain; IFEVS, Polimodel and Fiat in Italy; plus Magnomatics and the University of Sheffield in the UK.

The European Union shelled out 2.8 million euros to support the project, which aims to advance electric car technology. According to the P-MOB team, the primary advances of the new prototype are its “novel approach to advanced systems integration focusing, among other things, on solar cells, e-motor and magnetic torque control, power-energy management, distributed accumulators and technologies to enable e-vehicles to put power back into the grid when not in use.”[wzslider height=”400″ lightbox=”true”]