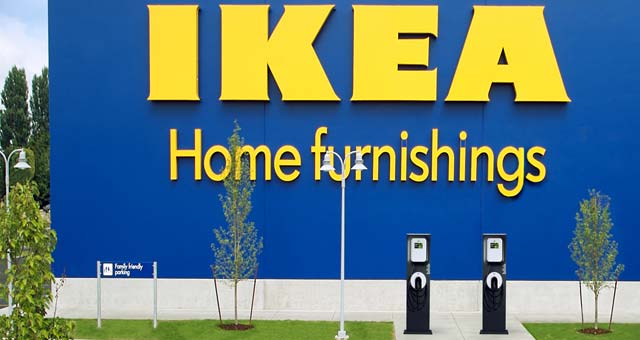 IKEA announced it extended its successful partnership with ECOtality with plans to add 24 Blink electric vehicle charging stations across eight more locations in the United States.

The newly designated sites include seven stores in Illinois, Georgia, Pennsylvania and Texas, as well as the U.S. corporate office.

It is expected that installation can begin next month with completion by end of summer 2013. Installation of these units will bring the total number of Blink charging stations at IKEA locations to 55. Two years ago, IKEA installed a combined 31 units at nine Western U.S. stores in Arizona, California, Oregon, and Washington.

“We are fortunate to be able to expand this relationship with ECOtality, bringing EV charging stations to more IKEA locations across the U.S. since IKEA stores are typically visible and accessible from key points within a local metropolitan area,” said Mike Ward, IKEA U.S. president. “Increasing access to EV charging stations advances our goal of helping coworkers and customers – as well as members of the communities in which we operate – live more sustainable lives.”

“We are pleased to now have Blink charging stations in nearly half of all IKEAlocations in the country,” stated H. Ravi Brar, CEO of ECOtality. “IKEA is a household name well-known for their sustainability efforts, and we are proud they have chosen Blink as their EVSE provider of choice.”