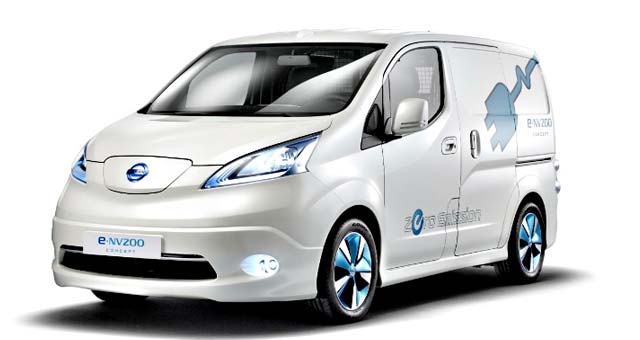 Nissan will conduct a field test of the 100% electric compact van, e-NV200, in cooperation with DHL Japan, Inc.

The Tokyo Metropolitan Area will serve as the testing ground.

The test will be conducted with a view to the commercial launch of the e-NV200 in 2014. Nissan will provide DHL Japan with a test model of the e-NV200 for approximately three weeks. This prototype will be used for the delivery of packages to companies and commercial facilities around the Marunouchi District of Chiyoda-ku, Tokyo.

DHL and Nissan will evaluate the vehicle’s potential and the practical usability, taking into consideration its economic and environmental performance. Valuable feedback gleaned from the field test will be reflected in the future development of the vehicle.

Under its global environmental program, “Go Green,” DHL and its parent company, Deutsche Post DHL, have established a group-wide goal of reducing CO2 emissions by 30% from 2007 levels by the year 2020. To that end, it is putting in place initiatives such as introducing the use of environmentally friendly vehicles and setting up energy-conservation equipment in its facilities.

It is the first logistics company to introduce a carbon-neutral delivery service, DHL Go Green, and has plans to make the progressive switch to electric vehicles in Germany, where Group Headquarters is located. As part of this active promotion of environmental activities around the world, DHL Japan is also currently in the process of considering the expansion of its fleet of environmentally friendly vehicles, including the introduction of electric vehicles (EVs). The needs of Nissan and DHL Japan coincided in this aspect, leading to the realization of the field test.

Nissan has been carrying out field tests since 2011 for the 100% electric e-NV200 with many major corporations. Nissan has already road tested the e-NV200 with several other major companies, including AEON Retail Co., Ltd., Tochigi Prefecture, FedEx Express and the City of Saitama in Japan, and British Gas and FedexExpress in Europe, while recently in Singapore, FedEx Express participated in tests as part of the company’s comprehensive global field testing program.