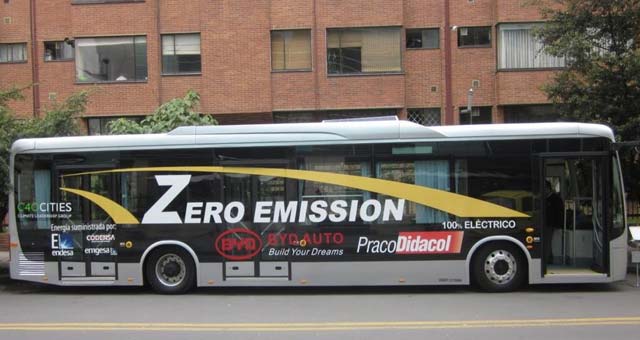 BUQUEBUS and CTS Auto in collaboration with the Chinese automaker BYD Ltd. has unveiled the first all-electric 12-meter rapid transit bus in Uruguay and the region.

The BYD electric bus integrates several cutting-edge technologies including two in- wheel, electric motors capable of a cruising speed over 88 km/h (or > 55mph), and a first of its kind environmentally-friendly Iron-Phosphate Battery.

This drive system provides a range of over 250 km (155 miles) – nearly 24 hours of service daily for most transit applications. The BYD battery technology also allows for a full charge in less than 5 hours. The bus can be charged overnight, while the electricity pricing is lower.

By 2015 it is expected that more than 500 BYD electric buses will be running on the streets and roads of Uruguay, generating significant environmental impact. The CO2 savings (vs. traditional diesel bus) is equal to 20,000 hectares of Forest per 500 buses in circulation – this is the same area covered by the entire city of Montevideo.

BUQUEBUS is the largest tourism transportation company in Uruguay, connecting more than 2 million passengers in Argentina and Uruguay per year by boat and by bus. Buquebus is also the largest Tourist Agent in South America, selling more than 300,000 hotel beds and 400,000 city tours per year.