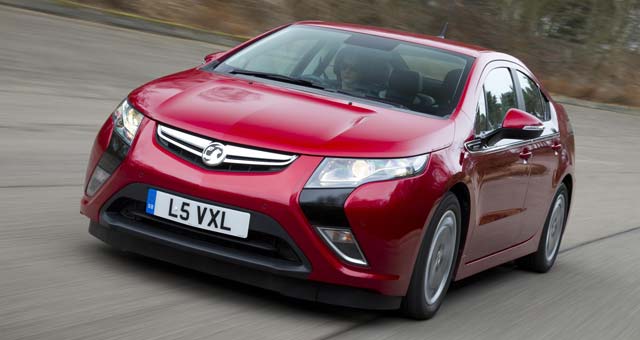 Beating off rivals including the Nissan LEAF and the Toyota Prius Plug-In, the Vauxhall Ampera scored more votes than any other model.

“We had a great response to our Car of the Year awards and Telegraph readers voted for the Vauxhall Ampera as their favourite hybrid/electric car,” said Leo Wilkinson, Acting Assistant Motoring Content Editor. “It’s a revolutionary car and our readers clearly value that.”

“Ampera is a technological masterpiece and we are very pleased that it has been recognised by Telegraph readers,” said Duncan Aldred, Vauxhall’s Chairman and Managing Director.

Arriving in UK showrooms last year, Ampera has a real-world battery range of between 25-50 miles, after which a petrol engine intervenes to generate up to another 300 miles of range. At all times, the Ampera’s wheels are electrically driven, setting it apart from conventional hybrid vehicles.

Vauxhall Ampera pricing starts at £29,995 on-the-road (including £5,000 Government grant) for the Earth model. The car is available through a network of 24 specialist Vauxhall dealers.
The Vauxhall Ampera vehicle is also offered on the 3-Day Test Drive programme through which customers can test a Vauxhall for three days, without paying a penny more than the fuel used.

Available on Positiv and Electron trims, private buyers will be entitled to three years or 60,000 miles free servicing and a £2,000 fuel contribution, enough to cover both electric and petrol costs for three years for an average Ampera driver.

Other benefits include a Type-2 charging cable which will enable customers to charge their Ampera at the vast majority of public charging points and a £335 (VAT inclusive) allowance equivalent to the 25 per cent funding gap on domestic home charging installations announced after last month’s Budget.

All of these exceptional benefits are in addition to Vauxhall’s industry-first Lifetime Warranty, and Ampera’s eight year/100,000 mile battery warranty.