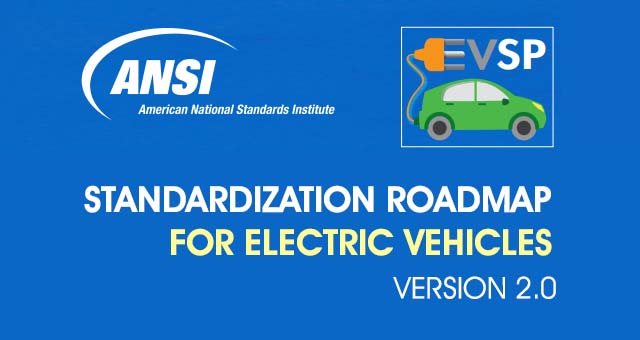 The Standardization Roadmap for Electric Vehicles – Version 2.0 (click for PDF version) tracks progress to implement recommendations made in the roadmap version 1.0 and identifies additional areas where there is a perceived need for standardization work to help facilitate the safe, mass deployment of electric vehicles and charging infrastructure in the United States.

Developed by representatives from more than 100 private- and public-sector organizations, the Standardization Roadmap aspires to maximize coordination among those developing standards for electric vehicles – primarily plug-in electric vehicles (both battery-powered all-electric vehicles and plug-in hybrids) – and the charging infrastructure needed to support them.

The publication considers issues that are integral to consumer adoption of EVs such as safety, performance, and interoperability. It describes relevant standards, codes, and regulations that already exist or that are in development, and gaps where new or revised standards would prove useful. Gaps are prioritized as needing to be addressed in the next two years (near-term), two to five years (mid-term), or more than five years (long-term). Standards developing organizations and others that may be able to take up the recommendations are noted. Conformance and training programs are also considered, including for those who provide support services for EVs and the infrastructure.

Highlights of the revision include:

– the closing of four partial gaps on power quality, DC charging levels, the safety of electric vehicle supply equipment (EVSE), and EV coupler safety, where work to publish a new standard or a revision to an existing standard was still in progress at the time the original roadmap was released last year and has now been completed;

– substantial modifications to fifteen of the gaps identified in the roadmap version 1.0;

– an indication of the status of progress on all outstanding gaps, including those where new standardization activity was initiated in response to roadmap version 1.0;

– significantly expanded text in a number of areas, in particular the infrastructure communications sections and appendix A on EV charging actors and communications; and,

– information on domestic and international coordination efforts since publication of the original roadmap.

Also updated is the ANSI EVSP Roadmap Standards Compendium, a searchable spreadsheet of standards that relate to the issues identified in the roadmap.

“Over the past year, ANSI has widely promoted the Standardization Roadmap for Electric Vehicles both domestically and internationally with a view toward achieving a coherent set of standards that will support the EV market for years to come,” said S. Joe Bhatia, ANSI president and CEO. “The further development of the roadmap during that time, culminating in this new version, demonstrates the strong commitment that exists among public- and private-sector stakeholders to see this effort succeed.”