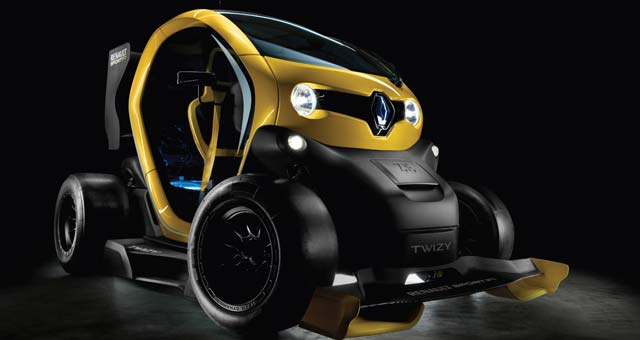 Twizy Renault Sport F1 sits on the wheels of a single-seater race car and is equipped with a front splitter, side-pods, rear wing and a diffuser complete with an F1-style rain light which forcefully express the concept’s ties with motor racing’s premier category.

Twizy Renault Sport F1 delivers genuine high performance thanks to its Kinetic Energy Recovery System (KERS) which is identical to the solution used by Renault-powered Formula 1 cars. The system instantly boosts power output six-fold to reach almost 100 horsepower and is capable of catapulting the car from standstill to 62 mph as quickly as Renault’s highest-performing road car, Mégane Renaultsport 265. This technological gem is the fruit of close collaboration between the engineers at Renaultsport and their colleagues at Renault Sport F1.

The Twizy Sport F1 showcases Renault’s advanced expertise in electric technology employed in F1, notably in the field of KERS in which it was one of the precursors in 2009. Renault’s long-standing commitment to motor racing’s blue ribband category provides it with a unique technological laboratory, giving it an advantage not only in the world of race cars, but also in that of road cars.

Twizy Renault Sport F1 will be shown at major events throughout the year, beginning with its first public appearances at the World Series by Renault meeting at Aragon, Spain (April 27-28), followed by the Barcelona Motor Show.

F1 TECHNOLOGY APPLIED TO TWIZY
Twizy Renault Sport F1’s calling is immediately apparent through its slick tyres (the same as those fitted to the Formula Renault 2.0 single-seater), as well as through its carbon splitter, side-pods and rear wing. Its unique proportions give it the appearance of a beast that is about to pounce yet which is still fun to drive.

Other features derived from the racing world are its single-seater type mirrors and diffuser, which incorporates the rain light of a Formula Renault 3.5 car. At the same time, the bulbs of the lights have been replaced by LEDs which, again mirroring the world of motor sport, consume less energy.

Meanwhile, Twizy’s rear seat has made way for the KERS which is visible inside a transparent housing. Last but not least, Twizy Renault Sport F1 is equipped with an F1-type steering wheel from the Renault Sport Technologies catalogue.

Twizy Renault Sport F1 is consequently equipped with two electric motors, i.e. Twizy’s original motor (17hp/13kW) onto which an F1-style KERS has been grafted to turn the concept car into a genuine pocket rocket with exceptional performance.

When the KERS is activated, Twizy Renault Sport F1’s power output climbs instantly six-fold, from 17 to 97 horsepower (72kW). This boost is available for approximately 13 seconds, just as it is in the case of a Formula 1 car. Thanks to this additional power, the concept car is capable of accelerating from standstill to 62 mph in the same time as Mégane Renaultsport 265.

The driver can choose between two modes for the KERS used for Twizy Renault Sport F1, using the controls located on the steering wheel.

1. Recovery mode: with this mode activated, the electric motor functions like a conventional generator, drawing power like a dynamo to convert the mechanical energy produced by Twizy main motor into electrical energy. Up to 4kW can be siphoned off in this way to charge the battery while on the move.

2. Boost mode: the energy recovered using the Recovery Mode can be re-employed whenever the driver wishes by pressing on the button located on the steering wheel. This reverses the process. Instead of serving as a generator, the KERS’ motor-generator unit (MGU-K) now functions as a motor to bring a power boost to the principal motor to which it is directly linked via the driveshaft. The maximum power output of the MGU-K is 60kW (approximately 80hp).

The charging process and the way the stored energy is delivered are controlled by a control unit which is itself linked to Twizy Renault Sport F1’s ECU (Electronic Control Unit).

When the system is triggered, the maximum revs of Twizy’s motor rise to 10,000rpm for a top speed of 68 mph. The fruit of advanced technology, the MGU-K fits inside a 10cm-diameter cylinder and can rev to as high as 36,000rpm. The KERS is equipped with its own battery capable of very short charge/discharge cycles. Derived directly from F1 technology, the package weighs barely 30kg, battery included.

Given that the peak revs of the KERS and Twizy’s principal motor are 36,000rpm and 10,000rpm respectively, the connection between the two was one of the chief challenges of the project. Synchronisation is ensured by a 1:3.6 reducer gear which uses the same drive gear as that of the F1 V8 engine.

The KERS uses a pressurised lubrication system to enable certain bearings to withstand peak revs of 36,000rpm. Meanwhile, in order to prevent the KERS battery from overheating despite the constraints to which it is exposed, Twizy Renault Sport F1 is equipped with water cooling. Both these systems are existing Renault Sport Technologies solutions.

Twizy Renault Sport F1’s steering wheel is derived directly from that of the Formula Renault 3.5 race car. Its functions have been adapted for use on an electric vehicle equipped with KERS, while the rim is of a wider diameter.

The amount of energy recovered while the Recovery mode is activated can be adjusted using the four-position rotary knob. Another rotary knob enables the power boost to be set at one of six pre-set levels, ranging from 10 to 60kW.

The driver releases the energy stored by the KERS by activating the two steering wheel-mounted paddles at the same time. To show spectators that the system has been activated, the rain light incorporated in Twizy Renault Sport F1’s diffuser is switched on.

The concept comes with its own data logging system, with information displayed on a multi-page screen situated on the steering wheel. This display can be personalised to show information concerning both Twizy’s and the KERS F1 electronic systems.