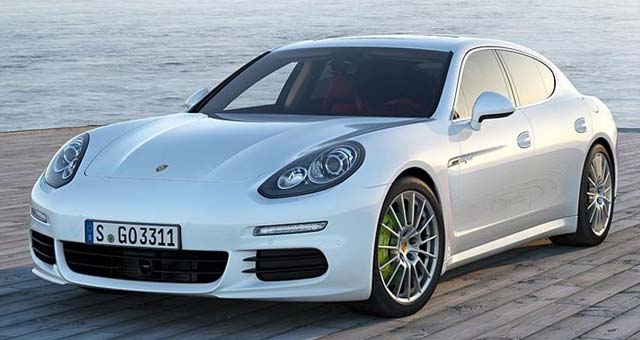 Porsche is introducing its first plug-in hybrid, the new Panamera S E-Hybrid, with claimed fuel economy of 3.1 l/100km (76 mpg US or 91 mpg Imperial).

The new Panamera S E-Hybrid improves upon the concept offered by the previous Panamera S Hybrid with a more powerful electric motor, a higher-performance battery that supplies more energy and is able be recharged from home or public vehicle charging stations.

The electric drive produces 95 hp, more than double the power of the previous model’s electric motor (47 hp). Electricity is stored in a newly developed lithium-ion battery, which at 9.4 kWh has increased capacity over the previous battery (1.7 kWh). Via the integrated on-board charging componentry and the standard Porsche Universal Charger (AC), the battery can reach full charge within approximately two and a half hours when connected to a 240V power source.

Simultaneously, its electric-only driving performance is substantially improved, enhancing acceleration, range, and top speed. Electric-only driving is possible without any fuel consumption or local emissions, which is especially advantageous in city driving.

The electric driving range of the Panamera S E-Hybrid is estimated to be greater than 20 miles (32 km) based upon current NEDC testing. Driving range may vary in real world operation, due to the effects of environmental conditions, terrain, air conditioning and heating use, driving style and other factors. The Panamera S E-Hybrid can reach up to 84 mph (135 km/h) in all-electric operation. This increases to 168mph when the V6 engine kicks in.

The parallel full hybrid system developed by Porsche also offers “coasting” at higher speeds, a mode wherein the internal combustion engine is turned off and the electric motors use vehicle momentum to generate electricity that is stored in the lithium-ion battery.

The Panamera S E-Hybrid also includes an entirely new range of convenience functions which can be activated and operated by Porsche Car Connect, a mobile app available for Android and iOS-powered devices. These functions include a charge status indicator and the ability to control the vehicle’s new auxiliary climate control option, which enables vehicle preheating or cooling via the Porsche Car Connect app. These functions can also be programmed from inside the vehicle. A mobile device may also be used for remote access to vehicle information, such as remaining driving range or vehicle location. Other functions not specific to the hybrid drive will also be available as options for other Panamera models via the Porsche Car Connect mobile app.

Engines and Transmissions
Panamera S models are now powered by an entirely new 3.0-liter V6 engine with twin turbochargers. The twin-turbo V6 replaces the naturally aspirated 4.8-liter V8 engine in the previous-generation Panamera S and Panamera 4S. The new bi-turbo engine is also used in the Executive version of the Panamera 4S. The engine offers increases of 20 hp and 15 lb-ft torque when compared to the outgoing V8 engine. Carefully-managed turbocharging ensures that the maximum 384 lb-ft (521 N·m) torque is available across most of the twin-turbo V6’s operating range.

Revised exterior with a new option: LED headlights
Exterior design changes of the new Panamera are extensive. The tighter and more prominent lines up front are especially apparent in the larger air intakes and the transition to the headlights. Perhaps the most distinguishing feature of the new generation Panamera is a new trunk lid; its laterally stretched glass emphasizes the vehicle’s width and makes for a more aggressive stance. Rear body proportions were also changed. A larger automatically deploying spoiler and a tighter transition to the rear lights complement the treatment at the front of the vehicle noted above.

The new Panamera continues the tradition of multiple options that enable owners to customize the look and function of their vehicles. Full-LED headlights, which lend the new generation a striking appearance, are now an option.

In addition, an expanded lineup of assistance systems is available for safety and convenience. The revised adaptive cruise control system is now offered with Porsche Active Safe (PAS). This system visually and audibly alerts the driver in the event of a sudden decrease in following distance and briefly tugs on the brakes. It can also intervene in the braking process and apply increased braking pressure in an emergency braking situation, if required. Another new feature, camera-based lane departure warning, offers greater convenience and safety in city and highway travel.

Pricing details are as follows:

*Base pricing does not include options, taxes, dealer charges, and a destination fee of $975.[wzslider height=”400″ lightbox=”true”]