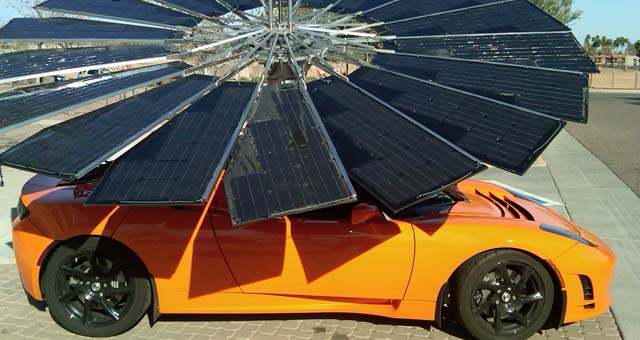 Monarch Power, an Arizona-based company, is unveiling the Lotus Mobile – a foldable solar charging system that includes 18 solar panels, which can be unfolded to resemble a flower.

Monarch Power hasn’t given many details about the technical specifications of the Lotus Mobile, but do say that it follows the sun on two axes and can give 30 percent more power than conventional rooftop solar panels of the same size.

It’s also less expensive because of significantly less structural support, since 70% of the traditional panel system cost is related to architectural placement.

While the idea was that the system can be deployed to charge electric vehicles, it can also be used to power home appliances and other electricity hungry devices in both the developed and the developing world.

Monarch Power will sell the Lotus Mobile at an “introductory price” of $3,999, but the first 50 contributors to the Kickstarter would get it for $3,199. The company said federal and state (in Arizona) tax credits could cut that price by 55 percent, to $1,440. The company said the first 100 orders will be shipped in the fourth quarter this year.