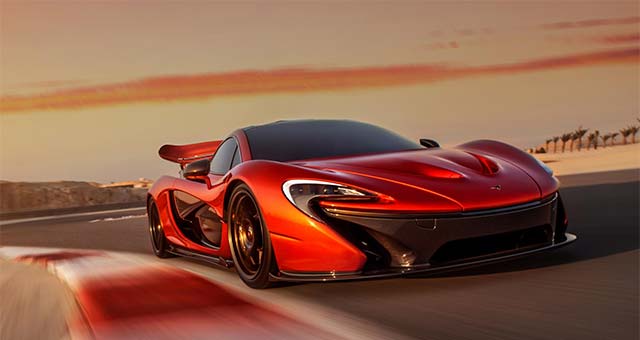 McLaren Automotive has released a selection of further stunning images of its next generation ultimate supercar, the McLaren P1, as part of the build up to the opening of the new McLaren Manama showroom over the 2013 Formula 1™ Gulf Air Bahrain Grand Prix program.

In keeping with the passion for Formula 1 that Bahrain brought to the Middle East nearly 10 years ago, the McLaren P1 paid an exclusive visit to the Bahrain International Circuit during its Middle East regional debut in Bahrain.

This series of dynamic images makes clear the links between McLaren’s Formula 1 expertise and its road car development program, and the McLaren P1 is the latest demonstration of that integration.

Set to re-write the rules for the dynamic performance of road-going sports cars through the delivery of an unparalleled Formula 1-derived driving experience, the goal of the McLaren P1 is to be the world’s most dynamically capable and exciting performance car. The new images taken at the BIC clearly display this ability in action, with the McLaren P1 displaying levels of active aerodynamics, downforce and performance delivery never previously experienced on the road….or on track by a road car!

The release of the new McLaren P1 images in the lead-up to the opening of McLaren Manama and the 2013 Formula 1 Gulf Air Bahrain Grand Prix comes at an exciting time for McLaren customers and fans in Bahrain. Adding to the excitement is the planned arrival of another McLaren ‘supercar’, the McLaren MP4-25.

Just 375 examples of the McLaren P1 will be made ensuring a level of exclusivity and desirability to match the car’s unique performance, and interest in the Middle East is already outstripping supply following the car’s successful debut in Bahrain.

The McLaren P1 will have the combined force of two highly-efficient powerplants, offering the optimum mix of superb throttle response, day-to-day drivability and top speed. A mid-mounted 3.8-litre twin-turbo V8 petrol engine is substantially enhanced featuring, for example, larger turbochargers and a highly effective electric motor, to give a combined output of 903 hp and a maximum torque figure of 900Nm. This ensures instantaneous throttle response through the rev range, more akin to a naturally aspirated engine. Emissions of less than 200g/km on the combined cycle are reduced to zero in full electric drive mode, while the Formula 1-derived DRS and IPAS technologies offer an increase in straight-line speed and an instant boost of power.

The P1 can also be driven solely in electric mode. In city driving, with an average speed of 48 km/h (30 mph), this could mean up to a 20km (12 miles) range. More than enough for an owner to enter, for example, a city centre Zero Emissions Zone, have dinner and return home.[wzslider height=”400″ lightbox=”true”]