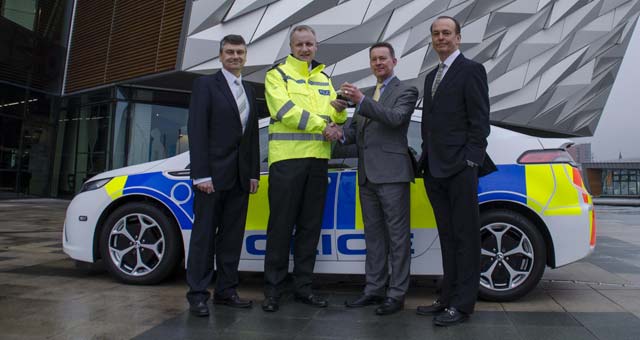 Vauxhall has handed over an awarding-winning Ampera to Police Service Northern Ireland (PSNI) as part of a trial of its extended-range electric vehicle.

The Vauxhall Ampera was handed over at eDRIVE, an electric vehicle event sponsored by the Northern Ireland Government, Department of Regional Development, held at the Titanic Museum, in Belfast.

The Ampera is due to go on service with PSNI in Belfast city centre as an incident response vehicle.

The E-REV technology in the Ampera, which won European Car of the Year 2012, makes it a good option for use in the emergency services as it benefits from both an electric motor and a petrol engine – so there isn’t any concern about range anxiety.

Charging point infrastructure is well developed in Northern Ireland: currently EV owners are no further than ten miles from a charger.

Motoring journalist and celebrity Ampera owner Quentin Willson was present at the handover, as was Ian Allen, Chairman of the Society of Motor Manufacturers and Traders’ Electric Vehicle Committee and Vauxhall’s Environmental Strategy Manager, who gave a key note speech at eDRIVE.

“If the Northern Ireland Police are as happy as I am with my Ampera then I’m sure they will have a long and productive relationship with the vehicle,” said Quentin Willson.

“Vauxhall is delighted that the Ampera is being trialled by PSNI, and we are confident that they will be impressed by the Ampera’s durability, performance and economy,” said Dick Ellam, Manager, Vauxhall Special Vehicles.