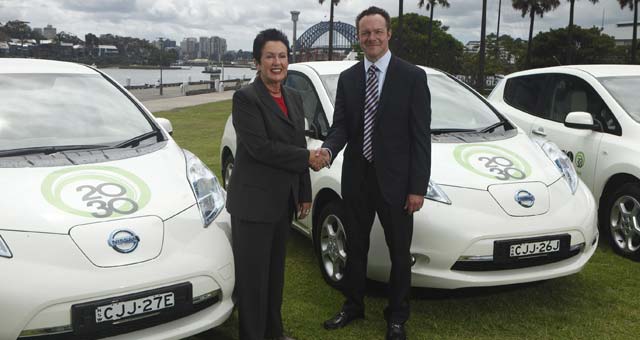 The City of Sydney has taken delivery of 10 Nissan LEAF electric cars in the single largest LEAF order in Australia.

Nissan LEAF electric cars replace the fleet of 10 Toyota Prius hybrid cars, and will be used by a range of City employees, including building and health inspectors, town planners and engineers.

The City of Sydney became the first council in Australia to achieve formal certification as carbon-neutral under the National Carbon Offset Standard in November 2011, as a result of its benchmark greenhouse gas reduction programs.

The City has installed seven electric charging stations at its public parking stations in Kings Cross and Goulburn Street.

Carbon emissions from charging the electric vehicles will be offset by zero-carbon electricity produced by solar panels installed on City buildings.

The LEAF’s 24kWh lithium-ion battery can be recharged in seven to eight hours using a normal charger or in around 30 minutes using a quick charger. A trickle charge will replenish the battery in 16 hours.

The Nissan LEAF comes equipped with a variety of advanced technologies, including the use of an in-built solar panel to assist in maintaining battery charge.