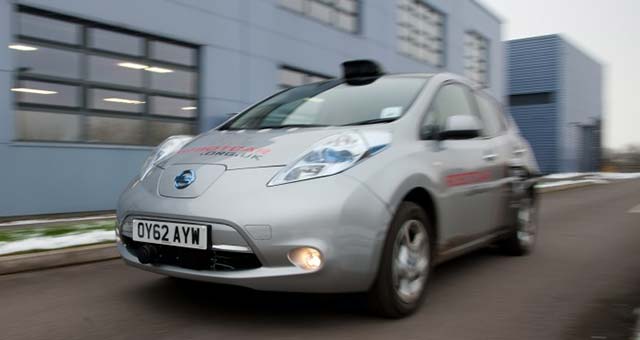 Researchers from Oxford University’s Mobile Robotics Group (MRG) have developed a low-cost autonomous driving system for cars with the help of a tablet computer.

At a build cost of only £5,000 (US$7,700), the autonomous driving system is also far cheaper than any other currently in development, and the MRG team says the technology could be installed in mainstream cars within 15 years.

Acting like a plane on auto-pilot, the autonomous driving system is designed to take over from humans in slow-moving heavy traffic or on a familiar route, such as a school run.

Led by Prof. Paul Newman and Dr. Ingmar Posner, the 22-member MRG team’s goal is to develop an autonomous driving system that is more affordable and can be used on standard production cars.

It is activated using an iPad on the dashboard – by tapping on a prompt, the driver can make the car’s onboard computer take the wheel.

The technology is currently being tested and is made possible because of advances in 3D laser mapping.

The autonomous driving system doesn’t use GPS because satellite navigation isn’t always available, isn’t accurate enough for driving and doesn’t provide any information about what’s going on around the robot car. Instead, RobotCar, a specially adapted Nissan Leaf electric car, has small cameras and lasers built into its chassis.

When the car is driven manually the lasers and cameras act as its ‘eyes’, mapping a 3D model of its surroundings, which is fed into a computer stored in the boot.

These sensors feed data to the three computers that are at the heart of the autonomous driving system. One is an iPad, which acts as the user interface. This offers to drive if the car knows the route, guides the driver to set up autonomous mode and warns of obstacles and other situations requiring human intervention. The iPad is monitored by the LLC (Low Level Controller) and the brunt of the work is done by the MVC (Main Vehicle Computer) installed in the boot.

Together these sensors and computers are used to build up a three-dimensional map of the route. The car can then ‘remember’ roads and suburbs, allowing it to drive itself along familiar routes.

The three computers act in concert. If they disagree on a situation, the car slows and stops.

At £5,000, the prototype autonomous driving system is considerably cheaper than any other currently in development, although the aim is to produce one for as little as £100 ($155) in the not too distant future.[wzslider height=”400″][source: Oxford University’s Mobile Robotics Group]