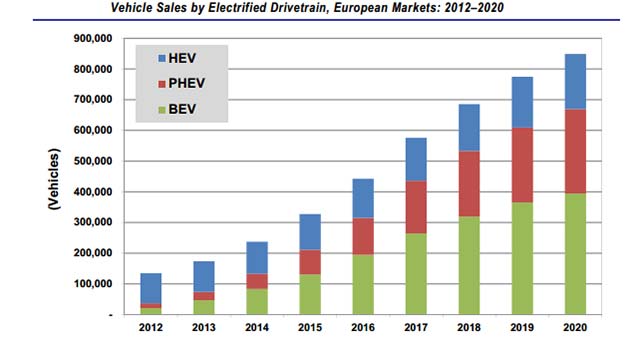 Across Europe, a greater variety of hybrid electric, plug-in hybrid and battery electric vehicle models are being offered by manufacturers each month.

Although government support is waning, the increasing availability of vehicle charging infrastructure that enables vehicles to charge at home, at the workplace, and in public places is facilitating market growth.

The top six European countries for electric vehicles on the road in 2020 will be Germany, France, Norway, the United Kingdom, the Netherlands, and Sweden, with this group representing more than 67% of the total market, and each having a volume in excess of six figures.

The situation is slightly different for plug-in hybrids, where only four countries are expected to exceed a volume of greater than 100,000 vehicles – Germany, France, Italy, and the United Kingdom – and these four represent 52% of the total.

Hybrid electric vehicles are presently the most common form of electrically-assisted vehicle on the road. It has taken over a decade, but in 2012 the Toyota Prius was recognized as the world’s third bestselling car, so this powertrain is now considered a mainstream product.

Also in 2012, Toyota finally launched a plug-in hybrid electric vehicle version, the Prius Plug-in, with a larger battery pack, joining plug-in vehicles from Fisker and Opel.  French OEM Renault and its sister company Nissan has invested heavily in battery electric vehicles, and Ford and GM are also moving into the market.

Battery charging technology remains an issue in Europe with additional costs incurred by infrastructure operators who want to make sure that their equipment is compatible with all the vehicles on the road regardless of which plug design is used.  Debate continues on the pros and cons of AC versus DC fast charging.

To date, most of the traditional OEMs have approached the EV as just another vehicle with a different powertrain, and have simply replaced or supplemented the internal combustion engine (ICE) and fuel tank with an electric motor and battery pack.  However, the electric drivetrain offers a lot more flexibility than the ICE arrangement that, despite detail design developments, still retains the essential architecture that was put in place 100 years ago. As the decade progresses, expect to see new vehicle designs that take advantage of electric drive characteristics to lower costs and offer new features.