The electric vehicle charging equipment market is experiencing a phase of rapid growth but also the growing pains that can be expected with a new market. The past 18 months have marked the transition of the plug-in electric vehicle (PEV) market into full commercialization, and that also means that the charging equipment market has made the same transition since it is fundamentally a product of the PEV market.

There has been an incredible influx of new players into this space, indicating the promise that many companies see.  However, the market is still growing relatively slowly, reflecting the sluggish growth of the PEV market to date.

Nevertheless, Pike Research expects that global sales of electric vehicle supply equipment (EVSE) will grow at a steady pace between 2012 and 2020 as the global market for PEVs grows.

The EVSE market will rise from less than 200,000 units sold in 2012 to almost 2.4 million units in 2020 at a compound annual growth rate (CAGR) of 37%.  Over the next few years, the EVSE market will be shifting away from dependence on government-funded deployments, although this will happen at different times in the various geographic markets.  The United States, the biggest potential EVSE market, is already coming out of the government-supported stage, as the majority of the Recovery Act funded deployments have been completed.  Some other countries, such as Canada and the United Kingdom, are now seeing more government programs launched, although the United Kingdom is also a pioneer in creating privately funded EVSE networks (the POLAR network). 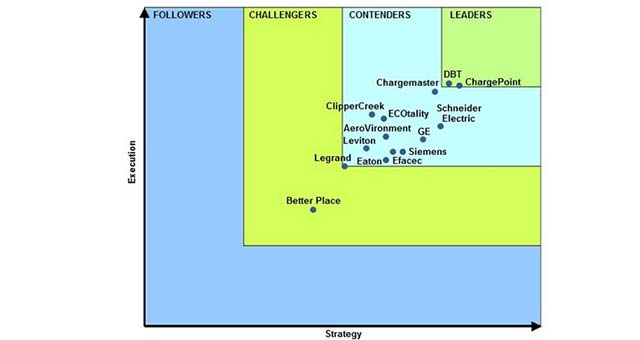 The 14 electric vehicle charging equipment manufacturers in this Pike Pulse report all offer Level 2 units to residential and commercial customers, with many also offering Level 1 equipment and DC charging.

This Pike Pulse report used the following guidelines to determine which EVSE companies should be included:

The criteria for ranking were:

Based on the scoring on these criteria, Pike then ranks companies as Leaders, Contenders, Challengers, or Followers in the global market.

Leaders: ChargePoint remains at the top of the Pike Pulse, although it is now joined in the leadership ranks by DBT. These companies are Leaders because they have secured a significant level of market share, are operating in a range of critical geographic markets (giving them the opportunity to become truly global leaders), are offering a wide range of feature-rich EVSE products, and demonstrate a focus on competing successfully in the next phase of the EVSE market.  It is worth noting that last year’s Pike Pulse did not include any Leaders, as the industry was still in its infancy and no company had yet distinguished itself.

Contenders: The majority of companies in this Pulse were classified as Contenders, who have Strategy and Execution. The Contenders category includes many large conglomerates that have entered the EVSE space to complement their existing businesses. These include Eaton, Efacec, General Electric (GE), Leviton, Schneider Electric, and Siemens. These are companies that have not yet captured significant market share (although it varies widely between each company) but that score well in Strategy due to an ability to invest in product development and to leverage their existing distribution channels and power technologies.

The other companies in this category are smaller and more focused on EVSE as a primary product: AeroVironment, Chargemaster, ClipperCreek, and ECOtality.  Interestingly, these companies have captured higher market share than the major industrial giants, but they lack the massive resources that will allow them to stay in the market even if it proves to be very slow growing.

Challengers: There are two companies that qualify as Challengers, largely because they are showing promise to make a play in the market, but will need to demonstrate that their strategic plans are viable and that they can execute on them in the coming year.  These are Legrand and Better Place.  Legrand is just beginning to make a major play in this market and is focused more on the residential sector, while Better Place is a relative newcomer, having more recently started offering EVSE to complement its battery switching business.