Pike Research: Consumer Interest in PEVs has Declined Since 2010

With the first commercial launches in 2010, plug-in electric vehicles (PEVs) have grown significantly in volume, with many auto manufacturers adding new models to their fleets.

However, according to a new consumer survey from Pike Research, a part of Navigant’s Energy Practice, fundamental interest in PEVs declined among survey participants between 2010 and 2012.

“Interest in PEVs remains moderate but has fallen over the last year,” says senior research analyst Dave Hurst. “While this decrease is not staggering, it might indicate that auto manufacturers need to address misconceptions among consumers and do a better job of educating consumers about the benefits of PEVs in order to attract buyers in larger numbers.”

In addition to a decline in interest, the 2012 survey found that there are a number of misconceptions in the market. When asked if PEVs are cheaper to own in the long run than gasoline vehicles, 37 percent of respondents disagreed. Additionally, 37 percent believe PEV batteries are dangerous. Even those respondents who expressed interest in PEVs showed signs of concern, as more than one third believes current PEV owners are often stranded as a result of their vehicles running out of power. 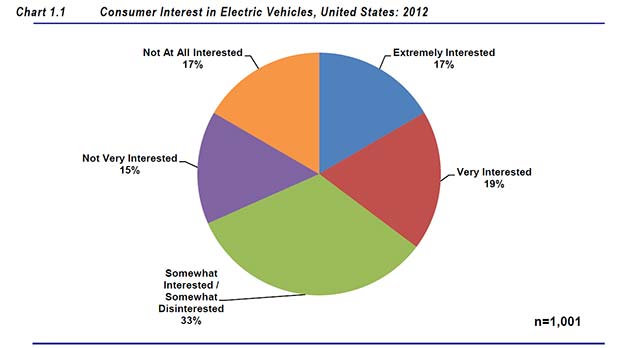 When asked which vehicle brands they would consider for a PEV, respondents continued to gravitate toward the same five brands in 2012. Toyota (50%) and Ford (43%) remain in the top two spots, followed by Chevrolet, Honda (both 42%), and Nissan (34%).

Consumers continue to cite insufficient driving range as a reason they are not interested in PEVs, followed by a desire for the technology to develop further before committing to purchasing a PEV. However, this latter reason saw a dramatic decline from 2011.

Levels of interest in PEVs were not dramatically different between demographic segments such as age, gender, income, and level of education, suggesting that these vehicles should have solid mass-market appeal. That said, consumers who are younger and have higher levels of education were somewhat more likely to demonstrate interest in PEVs.

Early adopters of technology were almost twice as likely to be interested in PEVs as the average consumer. Self-identified Democrats were somewhat more likely than Republicans (41% vs. 31%) to state they were extremely or very interested in PEVs.

Pike Research’s price sensitivity analysis utilized the Van Westendorp Price Sensitivity Meter methodology. This analysis showed that for a traditional internal combustion engine (ICE) vehicle that would ordinarily cost $20,000, the optimal price point of a comparable PEV would be $23,650, which is similar to the optimal price seen in 2010 and 2011. While this indicates an understanding among consumers that PEVs will be priced at a premium, the amount is significantly less than automakers’ intended prices. Pike Research believes that this gap between actual pricing and consumer willingness to pay will be a significant inhibitor of demand for PEVs. 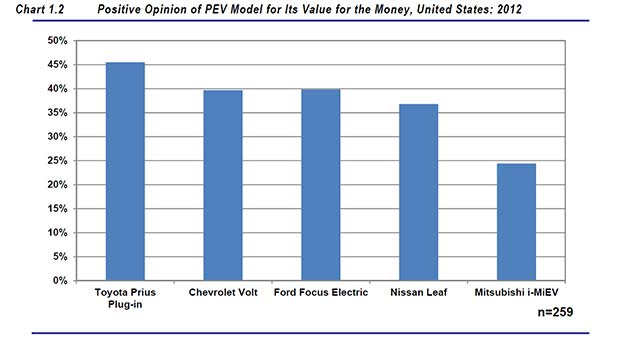 The survey was conducted in fall of 2012 using a nationally representative and demographically balanced sample. Pike Research conducted similar surveys in 2010 and 2011, and this latest version shows, when appropriate, year-over-year comparisons of data to identify trends.