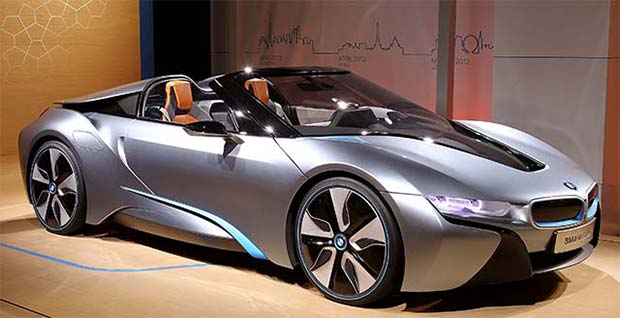 Mobility experts from around the country joined executives from BMW i to kick-off the BMW i “Born Electric” World Tour, a week-long event in Manhattan exploring issues of future mobility.

At a midday press conference, Mitchell L. Moss, director of New York University’s Rudin Center for Transportation Policy and Management, revealed the results of a new NYU-BMW i study which finds that, in the coming years and decades, fundamental changes in the demographic makeup of cities will profoundly alter the way people travel.

Also at the event, BMW i unveiled the BMW i8 Concept Roadster and next generation BMW i3 for the first time in North America.

The BMW i “Born Electric” World Tour at 1095 Avenue of the Americas offers the public an opportunity to explore the future of mobility through visionary new vehicles, interactive displays and demonstrations of technologies that will help shape the way we move in and around our cities in the future.

The NYU-BMW i study predicts a future where growing cities will be inhabited by populations that, although less likely to own cars, will increasingly utilize a new generation of smaller, more efficient, sustainable and “networked” vehicles to get around.

Demographic factors such as an overall urban population boom, the increase in urban single-person households and rapidly aging urban populations — the population age 65 and older in New York City, for example, is expected to increase more than 36 percent by 2030 — will lead to significant changes in urban mobility. These changes may include an increased emphasis on creating “walkable” city neighborhoods and an overall decrease in car ownership, though not necessarily car usage, as car sharing and other alternatives to ownership increase in popularity. The next generation of smaller, sustainable cars — specifically designed to operate in densely populated cities — is poised to be a key part of the solution in conjunction with improved fixed rail systems, buses, ferries and other modes of transportation. Improvements in technology will transform these vehicles’ role in urban mobility, with a trend toward creating highly connected, interdependent networks of vehicles.

The NYU-BMW i study also reports that demand for parking is going to intensify in major cities.  Increasingly, cities will need to invest in the “soft” infrastructure of information and communications systems, rather than improving streets and highways, as well as electric power generation, transmission and distribution systems, and electric vehicle charging infrastructure.

The study’s authors write that cities which have developed a mix of transportation systems, not solely dependent on one predominant mode of travel, are best able to adapt and recover in times of disaster. The fact that New Yorkers had the ability to access multiple modes of transportation was critical to helping the city and its people get up and running within days of superstorm Sandy.

In addition to the presentation of the key study findings, the press conference also featured the North American debuts of the BMW i8 Concept Roadster and the next generation BMW i3 Concept.  The BMW i3 and i8 will become the first purpose-built electric and hybrid-electric production vehicles to be made primarily from carbon fiber when they come to market in 2013 and 2014 respectively.

BMW i also announced that through BMW i Ventures, the company is investing in Embark, an award winning mobile app company dedicated to helping travelers navigate mass transit systems in several major cities, adding to its stable of mobility services providers which already includes MyCityWay and ParkAtMyHouse, as well as Chargepoint, the largest network of independently owned charging stations, which operates in more than 14 countries.

The company will also expand its DriveNow car sharing program, which recently launched in San Francisco and features a fleet of 70 all-electric BMW ActiveEs, to include San Francisco International Airport (SFO).  This premium zero emissions transportation option costs just a fraction of a typical trip from downtown to SFO – approximately $12 versus a $40 taxi ride. In the coming months, all DriveNow vehicles will include MyCityWay, adding a new layer of service and helping drivers find and take advantage of the many things San Francisco has to offer.

BMW i Ventures’ investments in these companies will further the company’s work towards increasing freedom of mobility for individuals, whether it be by car, train, bus or foot.

As part of the BMW i “Born Electric” World Tour stop in New York, BMW i will host a hackathon beginning on Friday, November 16, 2012 at 7:00 p.m. through Sunday, November 18, 2012 at 4:00 p.m. Under the theme of sustainability, teams of developers will be challenged to create an original app with the purpose of addressing some of the most pressing environmental problems facing major cities.  A group of judges will decide the winners of the contest based on the team’s ability to clearly articulate what the app does, the originality of the idea and whether the app is native to iOS and Android operating systems.

The BMW i Born Electric Tour kicked-off in Rome in June 2012, making stops in Dusseldorf and Tokyo prior to New York.  Following the New York stop, the tour will travel to London (January 2013) and Paris (March 2013) before ending in Shanghai (June 2013).  The seven-city, year-long global tour exploring the future of mobility is an initiative of BMW i, BMW’s visionary and sustainable brand dedicated to the development of new vehicles and services aimed at solving the mobility challenges facing the world’s most densely populated cities.[wzslider height=”400″ lightbox=”true”]