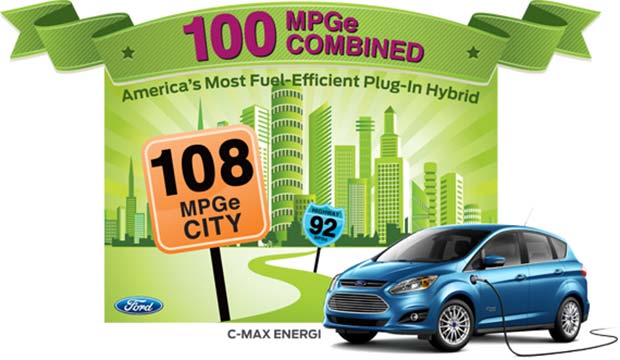 Over the course of five years, C-MAX Energi customers could save nearly $7,000 compared with the average new vehicle, according to the federal EPA label. Comparative savings could go even higher if the current trend of rising gas prices continues.

The U.S. Environmental Protection Agency rating places the C-MAX Energi in an elite group of production vehicles that have received EPA ratings of 100 MPGe or greater. This group includes the Ford Focus Electric at 110 MPGe in the city. The Fusion Energi plug-in hybrid, due out in early 2013, is projected to deliver 100+ MPGe. The addition of the Fusion Energi will help create one of the industry’s most fuel-efficient car lineups.

Many of the innovative technologies in C-MAX Energi are shared across Ford’s electrified vehicle lineup and draw from the automaker’s portfolio of about 500 patents related specifically to hybrid technology. Further, C-MAX Energi is projected to deliver 15 class-exclusive features.

Among the standard and available features are:

– SYNC with MyFord Touch offers multiple ways – including voice commands – for customers to manage and control their phone, navigation, entertainment and climate functions. Plug-in hybrids and all-electric models have additional options for monitoring information like battery state of charge

– MyFord Mobile, available for C-MAX Energi in early 2013, enables access via smartphone or Web-based interface to perform key tasks, such as monitoring a vehicle’s state of charge and current range or locating charge stations and planning routes to find them

– Hybrid transmission, designed by Ford engineers in-house, is capable of operating at high speeds and in a smooth, fuel-efficient manner at the same time