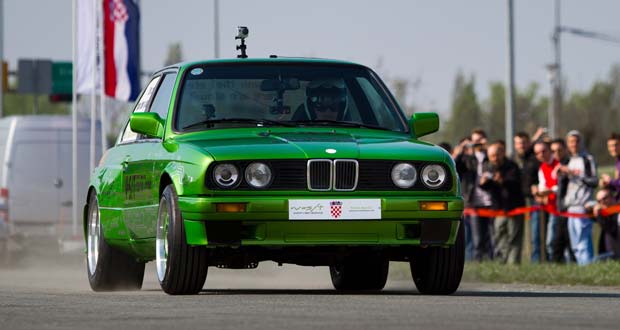 The e-M3 was Rimac Automobili’s first test mule – the car that started all.

The founder and CEO Mate Rimac, creator of the 1,088-hp Rimac Concept_One electric supercar, started to convert this car when he was only 19 years old: “I owned an old BMW E30 (MY 1984) which I used for drift and circuit races. At one of these races, the gas engine blew up. Then I decided to try building an EV. After one year or so the car was able to drive but I was not satisfied with the result. It was heavy, not very powerful and the range was very limited. I started to gather a team of experts to develop our own components since I believed that the electric propulsion can give much more compared to what was available on the market. At that time, I already had a very clear vision of my ultimate goal. Today, hard work is making my dream come true.”

Now the e-M3 (known as “green monster”) develops 600 horsepower, 900 Nm of torque, reaches 100 km/h from standstill in 3.3 sec and a top speed of 280 km/h (174 mph). Five development evolutions have pushed the e-M3 to become the officially fastest accelerating electric vehicle according to strict FIA rules.

The record braking attempt took place on a 2 km (1.2 mile) long military runway near Zagreb on April the 17th, 2011. Nonetheless, the records couldn’t be published until now. Mr. Rimac explains: “We had to wait over a year for FIA’s official approval to publish the records. But while we were waiting the spirit of inventiveness took us even further, so we made something even faster. Our pre-production car, the Concept_One, can beat the e-M3; by far.”

As for what was broken, here’s Rimac’s breakdown. Those with * indicators were, as of press time, records still subject to official FIA approval.