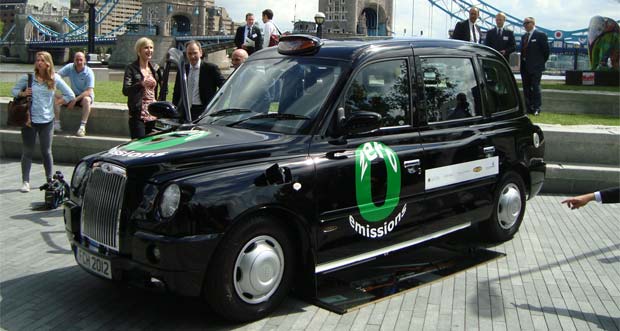 The distinctive London taxicabs are an iconic symbol in London, and a consortium of companies — Intelligent Energy, Lotus Engineering, TRW Conekt and London Taxi International — put a proposal together to develop hydrogen fuel cell taxicabs and approached the British government for research support and funding.

As a result of the proposal, a fleet of zero-emission fuel cell taxicabs was commissioned to transport athletes and dignitaries from around the world during the games. The cabs are powered by UQM’s PowerPhase Pro 100 electric drive system.

The UQM PowerPhase Pro 100 electric motor provides power to the rear wheels of the vehicle. A fuel cell system designed by Intelligent Energy works in conjunction with a high voltage battery pack and a UQM DC-to-DC converter to provide power for the vehicle. According to Intelligent Energy, the company plans to put the vehicles into full production after a successful test program in 2012.

This fleet joins another previously announced UQM-powered vehicle at the London 2012 Summer Olympics.