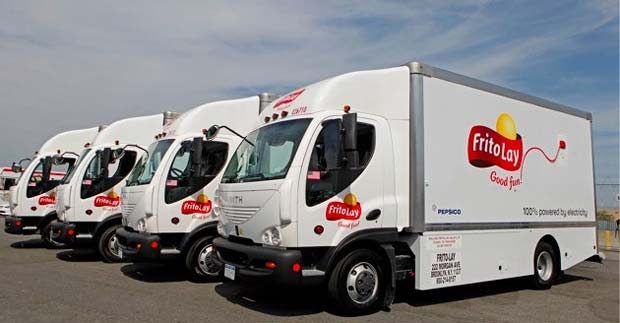 In May of this year, Frito-Lay reached a milestone of one million all-electric miles driven.

The initial rollout of all-electric trucks in California has already eliminated the need for an estimated 50,000 gallons of fuel and 1 million pounds of greenhouse gases.

When all 105 trucks are deployed by the end of this year, Frito-Lay expects to eliminate 200,000 gallons of fuel and nearly 4.5 million pounds of greenhouse gases annually in the state of California.  The new all-electric trucks will operate from distribution centers located throughout California: Alameda, City of Industry, La Mirada, Manteca, San Diego, San Jose and Torrance.

To support the introduction of all-electric vehicles to the state of California, Frito-Lay received a grant from the Mobile Source Air Pollution Reduction Review Committee (MSRC), specifically in the South Coast Air Quality Management District.  The company also received funding from the California Energy Commission and the Hybrid Truck Bus Voucher Incentive Project from California Air Resources Board, administered by CalStart.

In the U.S., Frito-Lay hopes to reduce its total fuel consumption and greenhouse gas emissions by 50 percent by 2020, compared to 2007 baseline. This effort supports PepsiCo’s commitments to environmental sustainability, particularly in fuel and greenhouse gas reduction. Across PepsiCo, in addition to electric trucks, the company has introduced 267 hybrid electric trucks and 67 compressed natural gas (CNG) tractors; 176 hybrid electric vehicles and14 CNG tractors are scheduled to operate in California.

Once all of the electric trucks are fully deployed across the U.S., Frito-Lay will eliminate the need for 500,000 gallons of fuel annually.

The emission-free trucks, manufactured by Kansas City, Mo.-based Smith Electric Vehicles, are capable of running up to 80 miles on a single charge and emit 75 percent fewer greenhouse gases than diesel fuel.