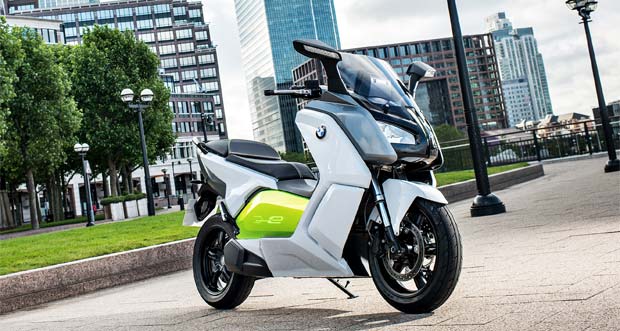 Based on last year’s E-Scooter concept, the “C evolution” electric two-wheeler was unveiled just ahead of BMW’s internal combustion C 600 Sport and C 650 GT maxi scooters, which will hit U.S. showrooms this fall.

With 11 kW continuous output and 35 kW peak output, the BMW C evolution e-Scooter has a powerful motor and provides a high level of riding fun. The top speed is electronically limited to 120 km/h (75.4 mph).

In terms of acceleration from 0 to 60 km/h, it comfortably holds its own against current maxi scooters a capacity of 600 cc or more.

Compared to conventional combustion engines, the electric drive of the BMW C evolution also offers significant advantages at low speeds in particular. Thanks to elaborate power electronics settings, the alternator offers the rider an instant, spontaneous response. There are no delays in torque build-up at all as are typical in combustion engines due to the clutch engaging and disengaging.

At 8 kWh, the storage capacity of the battery is extremely generous and ensures a range of up to 100 kilometers (62 miles). As in other areas, BMW Motorrad has been able to draw on synergy effects with BMW automobiles here. For example, the C evolution uses the same lithium-ion storage modules as are installed in the BMW i3. Here, developers paid particular attention to the quality and service life of the storage modules so as to ensure that the range is preserved even after many years of service life and in very cold weather.

One of the main technological challenges was optimum cooling of the high-voltage battery. While in electrically powered cars a cooling agent is normally used to cool the battery, air cooling is used in the “C evolution” in order to save space and weight. The heat of the high-voltage battery is dissipated by means of an aerodynamically optimized cooling air shaft at the centre of the battery casing through which there is a constant flow of air. To ensure optimum heat dissipation, the battery base has longitudinally arranged cooling ribs.

However, the battery casing in die-cast aluminium not only holds the cells with their special architecture but also the entire electronics unit for monitoring the cells. It also acts as a load-bearing chassis element.

The power electronics for the electric drive is installed behind the battery casing. This not only takes care of controlling the alternator within a range of 100 to 150 volts but also responds to rider commands, for example by detecting the position of the throttle grip. The system also processes information from the brake system and decides whether energy should be recuperated and how much recuperation torque is to be applied to the rear wheel if required.

The “C evolution” is powered via a drivetrain swing arm. The alternator is positioned behind the battery casing and integrated in the swing arm. Due to the proximity of the alternator output shaft and the swing arm axle, the moment of inertia around the swing arm centre of rotation is minimised. This also provides optimum suspension/damper settings and a sensitive response.

The secondary drive is via a tooth belt from the alternator to the rear belt pulley on the output shaft. From here, power is transferred to the rear wheel via a planetary gear. The total gear reduction is 1:8.4, while the maximum rotational speed of the alternator is 10,000 rpm. The alternator and power electronics are liquid-cooled.

BMW hasn’t released recharge times yet (other than to say they’re “quick”), but they do indicate that regenerative braking adds 10 to 20 percent of range.

The instrument panel of the “C evolution” has a large, easily legible TFT display which is conceptually based on that of the BMW i3. It has the obligatory speed display as well as offering a wealth of other information. This includes display of the battery charge state (SOC = State of Charge) and the energy balance. The latter is displayed by means of a progress bar, indicating to the rider whether energy is currently being converted into forward propulsion or being recuperated. This information helps the rider in his efforts to ride as efficiently as possible.

In addition to the familiar indicators, the instrument cluster of the “C evolution” naturally features all the status displays required by law in electrically powered vehicles. This includes warning lamps to indicate a potential insulation error or power limitation in the event of overload.

The front lighting unit encompasses headlamps with high and low beam. The “C evolution” also features a centrally located daytime running light. At the back there is a rear light in LED technology.

The “C evolution” draws on the innovative styling of the BMW Motorrad family, offering a thrilling, inspiring design which arouses an emotional response to the new drive technology. As in other BMW motorcycles, the so-called split face runs across the upper trim section, giving the scooter a distinctive and dynamic front view.

BMW Motorrad design style is also reflected in the styling of the twin-tipped spoiler in the front trim and in a boomerang-shaped, aerodynamically formed floating panel in the side trim. The short, sporty rear will have a helmet compartment in the serial production model and emphasises the proactive character of the “C evolution”.

The combined effect of the color “Light white” and the highlight colour “Electric green” reflects the vehicle’s specific properties, such as maximum environmental compatibility, supreme dynamic performance and simple handling. What is more, the illuminating “e” inscription on the two battery side trim elements and motor unit bear out the technical character of an electrically powered scooter.