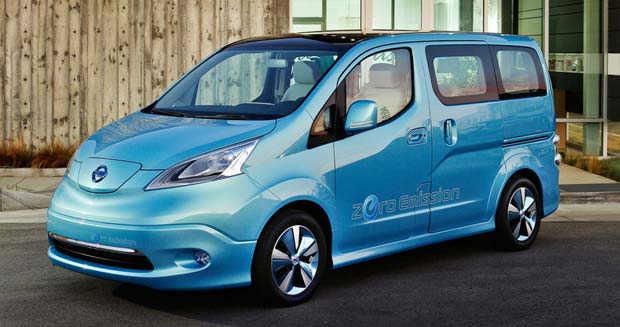 Nissan Motor Co., Japan’s second- biggest carmaker, announced that a 100% electric compact van, the e-NV200, will go into production at its Barcelona plant in the 2013 Financial Year.

The e-NV200 new model will be based on the existing NV200 currently produced at the plant and will be an important and innovative addition to Nissan’s global range of light commercial vehicles (LCV’s).

The new model, which represents EUR100 million investment by Nissan in Spain, is expected to create around 700 new jobs at the plant and throughout its local supplier base.

e-NV200 will provide both businesses and families with functional and roomy interior space and will retain the host of innovative and practical features of the current NV200 line up combined with the most advanced powertrain components of the Nissan LEAF.

This will deliver a driving range similar to the Nissan LEAF on a single charge and similar performance, together with best in class running and maintenance costs.

Nissan;s e-NV200 electric van was revealed as an e-NV200 concept at the Detroit Motor Show in January. The e-NV200 shares its major drivetrain components with the innovative Nissan LEAF. Silent, zero emission power is supplied by a lithium-ion battery composed of 48 compact modules and a high-response 80kW AC synchronous motor that generates 280Nm of torque. Unlike a conventional internal combustion engine, the motor delivers 100% of its torque from start with immediate response bringing excellent acceleration and smooth, comfortable driving feel.

e-NV200 will also make a significant contribution to Nissan’s aim of becoming the world’s largest LCV manufacturer by 2016 as a key pillar of the Nissan Power 88 mid-term plan.

Last year Nissan achieved an historic milestone of selling more than one million LCV’s worldwide in a single year.

The current NV200 line up has already sold around 100,000 units. Its popularity led it to be chosen as the next generation New York City ‘Taxi of Tomorrow’ following a rigorous selection process.

Currently, intensive evaluations of prototype NV200-based electric vehicles are being carried out in Europe. Trials will continue in coming months in order to provide real-world feedback from the most demanding usage. Feedback will help Nissan to fulfill exact customer requirements ahead of the start of production expected in FY13.