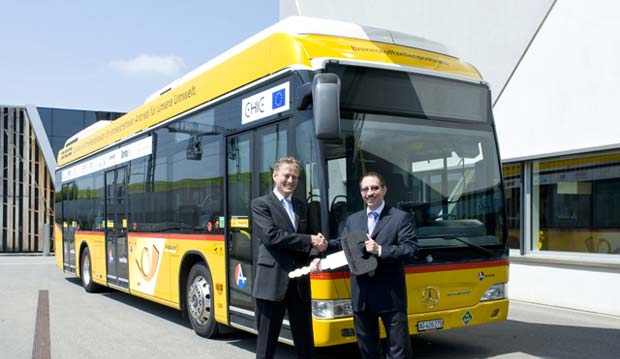 Since the end of 2011, five Mercedes-Benz Citaro FuelCELL Hybrid models have been serving on routes in and around Brugg (in the canton of Aargau) as PostAuto vehicles.

Compared with the fuel-cell omnibuses that were tested from 2003 on as part of the CUTE and HyFLEET:CUTE projects, the new Citaro FuelCELL Hybrid offers significant innovations: hybridisation with energy recovery and storage in lithium-ion batteries, powerful electric motors fitted in the wheel hubs with a continuous output of 120 kW, electrified PTO units and more advanced fuel cells. These cells will have an extended service life of at least five years, or 12 000 operating hours.

The fuel-cell stacks in the new Citaro FuelCELL Hybrid are identical to those used in the Mercedes-Benz B-Class F-CELL with fuel-cell drive. As in the earlier fuel-cell buses, the two stacks are already installed on the vehicle’s roof. A new addition is lithium-ion batteries, which store energy that is recovered during braking.

With the electric power from this energy accumulator, the new Citaro FuelCELL Hybrid is able to run for a number of kilometres on battery power alone. The concept behind the new FuelCELL bus essentially corresponds to that of the Mercedes-Benz BlueTec hybrid buses. However, these derive their electric power from a diesel generator, whereas in the new FuelCELL buses the fuel cells generate the electricity for the drive motors, without producing any emissions whatsoever.

The Mercedes-Benz Citaro FuelCELL Hybrid made its debut in Hamburg in November 2009. The latest-generation fuel-cell hybrid bus boasts all-round environmental compatibility: it generates zero emissions and virtually no noise. As such, the Citaro FuelCELL Hybrid is ideally suited for operations in congested inner cities and metropolitan areas.

Thanks to improved fuel-cell components and hybridisation with lithium-ion batteries, the Citaro FuelCELL Hybrid consumes almost 50 percent less hydrogen than the previous generation. The fuel-cell bus has a range of around 250 kilometers (155 miles).

As a result, it has been possible to reduce the number of tanks from the total of nine on board the fuel-cell buses deployed in earlier trials to seven on the current vehicles, holding 35 kg of hydrogen in all. With these diverse technical advances, buses running on electric power alone with fuel cells as energy generators are now a major step closer to production maturity.

In related news, Mercedes-Benz B-Class F-CELL has been voted the best electric car with fuel cell in an online survey completed by 18,324 readers of specialist magazines “Auto Bild” and “Auto Test.”

The B-Class F-CELL is the first passenger car with fuel cell drive to be produced by Mercedes-Benz under series conditions. Production of the model has already been under way since 2009. The vehicle generates the power for its electric drive itself on-board from the chemical reaction between hydrogen and oxygen. Its tank can be filled with hydrogen in three minutes, providing a range of some 248 miles. And thanks to its 100 kilowatt (136 hp) electric motor, it provides driving pleasure and dynamism on a par with a 2.0-litre gas engine. The vehicle’s NEDC consumption amounts to just 71 mpg (diesel equivalent). At the same time it produces no emissions whatsoever: the only thing to come out of its exhaust is pure water.

This zero-emission principle, paired with impressive performance characteristics, convinced the readers of the specialist German magazines “Auto Bild” and “Auto Test” to vote the Mercedes-Benz B-Class F-CELL into first place in the category “Best electric vehicle with fuel cell”, thus enabling it to secure the eCar Award 2012.[wzslider height=”400″ lightbox=”true”]